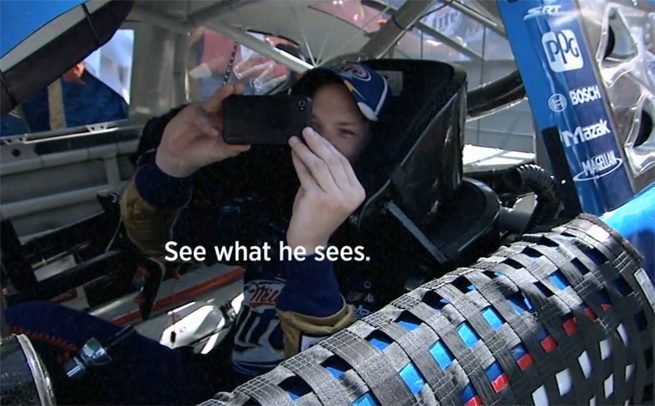 Global social network Twitter ran its first-ever TV commercial this weekend during a NASCAR race, but if history is any indication, commercials won’t necessarily help the service go mainstream.

Twitter’s 15-second commercial aired during the 2012 Pocono 400 NASCAR race. The ad features driver Brad Keselowski, who is presumably using his phone’s camera to take photos and post them on Twitter. The ad has the tagline, “See what he sees.” and then shows the URL “Twitter.com/#NASCAR.” That URL redirects to a new Twitter hashtag page that shows a collected presence of NASCAR on Twitter, something we’ll likely see other brands take advantage of in the future.

Certainly it’s worth a shot for Twitter to attract more people to its network of people providing real-time updates about their lives or spreading links to interesting content. However, Google+ tried to do the same thing with a 90-second TV ad that ran around Thanksgiving last year and by most accounts, Google+ is a still a ghost town. Google doesn’t reveal what exactly makes a user active, but its 100 million “active users” spend 3 minutes a month on Google+.

Twitter could prove different from Google+ because it already has a strong footing with many Internet users and brands. It’s certainly not as mainstream as Facebook, but maybe with targeted TV ads, it could attract more people who want to read updates but not necessarily post them.

You can watch the super short commercial below: