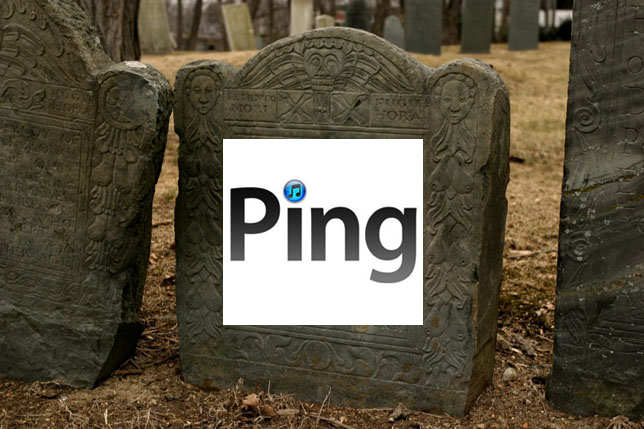 Apple’s Ping, that social music service in iTunes that most people didn’t use, is finally kicking the bucket. In the next version of iTunes, Ping will be gone, sources told All Things D.

Ping is a social network for music, created as a way to share song and album purchases and recommendations with your friends. You can also discover new artists on Ping and follow their work. Former Apple CEO Steve Jobs unveiled the service in September 2010.

Ping’s clunky design and lack of a strong social network ultimately lead to its demise. The service didn’t do a great job at masking the fact that it wanted to encourage iTunes purchases, not bring music listeners together. And It didn’t help that while many people use iTunes to manage their iPads and iPhones, most aren’t really happy with iTunes overall.

Apple’s current chief executive Tim Cook recognized the shortcomings of Ping, expressing how he felt in May at the D10 conference.

“We tried Ping, and I think the customer voted and said this isn’t something that I want to put a lot of energy into,” Cook said, “Will we kill it? I don’t know; I’ll look at it.”