The data on a company that would take you two days to compile, at your fingertips in two minutes. That’s the promise of InfoArmy, a new startup from Jim Fowler.

Jim Fowler knows a thing or two about crowdsourcing and business data. His previous startup, Jigsaw, let users (mostly marketers and recruiters) share data about business contacts they had in exchange for business contacts they needed. While the idea was not without controversy — that’s other people’s contact information being traded — the company had an extremely successful exit when it was purchased for $175 million (after full earn-out) by Salesforce.com in 2010.

While Jigsaw was primarily about contact data, InfoArmy provides an analysis of companies in their market context: products, structure, profitability, competitors, and more. The reports will allow users to view deltas in the data over time as companies’ revenue models and marketing messages change as new product lines emerge.

There are existing companies that do similar things: D&B (formerly Dunn & Bradstreet), Capital IQ, a host of business directories of varying but mostly poor quality, and, perhaps, CrunchBase. But InfoArmy is intended to be more up-to-date, more useful, more comprehensive, and more focused on competitive intelligence.

“The value isn’t in the data,” Fowler told VentureBeat yesterday. “The value is in the change … the updating of the data.”

InfoArmy data on each company is written by a team of two researchers, many of them with advanced degrees, who are supported by any number of individuals around the planet. But they are not contributing their labor out of the goodness of their hearts. Rather, there’s a good old-fashioned capitalist motivator involved: cash. 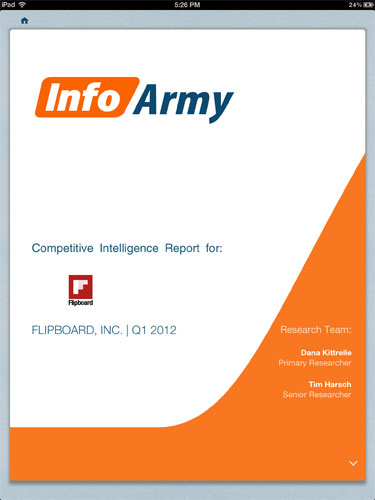 Above: Clients will be able to see who created each business report

“We’re sharing half the revenue — a 50-50 split — with the army,” says Fowler. “We’re not guaranteeing any revenue, but there’s also no cap on how much they can earn.”

InfoArmy has already signed up over a hundred researchers, including MBA students, business analysts, professors, and management consultants. Together they’ve created hundreds of reports. When InfoArmy hits critical mass, which Fowler defines at 100,000 reports, the company will enter a revenue phase. 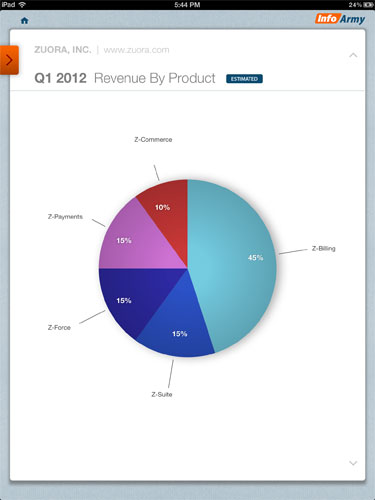 Above: Reports will show breakdowns of revenue by product line

Business reports will cost you $99 for a year’s subscription, which includes quarterly updates. The company will offer multiple pricing plans, however, including both unlimited subscriptions and enterprise licenses supporting multiple users.

All data and reports are designed for consumption on a tablet, starting with the iPad.

InfoArmy is based in San Mateo, Calif., and has 24 employees. The company has raised $2 million in seed funding from Jim Fowler, the CEO, and angel investor John Peterson, and intends to raise a larger round late in 2012.