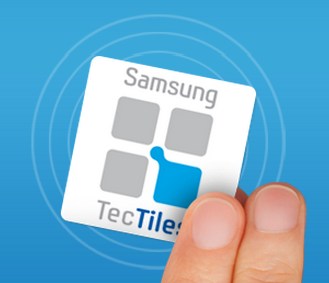 With Samsung’s TecTiles, a new programmable NFC (near-field communication) tag format, you’ll be able to do all of that, and more — assuming you own an NFC-enabled Samsung Android phone.

Samsung is launching TecTiles alongside its much-anticipated Galaxy S III smartphone later this month, in a clear bid to make NFC something more than just the pipe dream standard of the mobile payments industry. I’m not yet convinced that TecTiles will be a hit for Samsung, but the tags are definitely a much-needed step forward for the NFC format.

The TecTiles themselves don’t look particularly high-tech — they’re just small stickers with built-in NFC chips. You can program them using the free Samsung Tectile app on any NFC-enabled Android smartphone (Google Play shows that the HTC One X supports the app). They’ll retail for $14.99 for a pack of five in carrier stores, as well as on Samsung’s website.

I was able to see the TecTiles in action at a small press gathering earlier this month, and they worked as advertise. Using the Samsung Galaxy S III, I was able to swipe several pre-programmed TecTile tags to do things like turn the phone silent, add a business contact, and change the screen brightness.

Programming a TecTile was dead simple as well. In addition to the items I mentioned above, you can also program the TecTiles to do things like make a call, updated your Facebook status, launch an app, or connect on LinkedIn. Samsung will undoubtedly add even more interesting functionality to the format over time.

When asked if Samsung would ever consider opening up TecTiles format to other manufacturers, PR staff said that’s a possibility — though there’s nothing definite in the works. The mobile industry will eventually need to converge on some sort of NFC tag standard, and Samsung’s technology is already  the leading contender. Both LG and Sony have released their own tag offerings, but those are more expensive and work on fewer devices than Samsung’s.