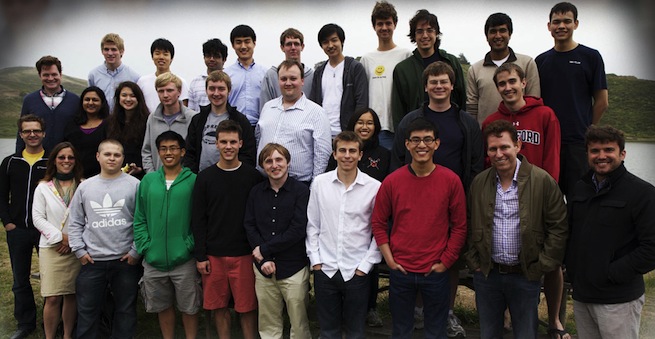 They can’t buy a celebratory bottle of champagne, but they’re hoping to start a new business. Meet the new class of under 20 would-be college kids dropping out of college to work on their entrepreneurial dreams under the watchful eye of investor Peter Thiel.

The early Facebook investor set up a program last year to give 20 teens and young adults the chance to play around with $100,000 while building a business. Now in its second year, The Thiel Fellowship is unveiling the newest fellows to join the program.

Thiel’s Fellowship is simple; select 20 promising students, no older than 20, with grand ideas to change the world or start a new business. Then, give them $100,000 over two years of the program and surround them with mentors to teach them. Instead of going straight to college, these kids learn how to start a business the “real-world” way.

Ambitions are high for the 2012 class. Taylor Wilson, 18, is the youngest person in history to create nuclear fusion and will spend time at the Fellowship producing medical isotopes for use in the diagnosis and treatment of cancer. Connor Zwick, 19, wants to reform the education system, starting with a mobile study tool.

It’d be most parent’s nightmare to hear their child was dropping out of college. Zwick’s parents were supportive, but hesitant.

“My parents obviously had mixed feelings [about me joining the Fellowship]. On one hand, they sort of wished I hadn’t made it and the decision to stay in school would be more obvious. On the other, they were happy because obviously being in a situation with more choices is always better,” said Zwick in an email statement to VentureBeat.

Thiel started this venture last year, pointing out that we were in an “education bubble.” Graduates leave college with thousands in debt and often few marketable skills that will get them a job, Thiel contends.

“Pundits and hand-wringers love to claim that universities are the only path to a successful life. In truth, an inquisitive mind, rigorously applied to a deep-rooted problem can change the world as readily as the plushest academic lab,” said Thiel in a statement.

The Fellowship has obviously sparked a lot of controversy. Public opinion still holds a degree in high regard and many employers require it to get a job. Few people who’ve gone through school would admit that it was a waste of time and left them with nothing but debt.

Fellows are banking on the knowledge they gain to propel their career. In a way, the risk is low for these students. They might end up with a business they can continue to grow after the Fellowship ends. And if they fail, college will still be waiting for them.

On July 11 and 12, CNBC will air a documentary about the selection process for the 2012 class. The full list of 2012 Fellows is below.

Clay Allsopp (20, Raleigh, NC) thinks people should be able to forget about technology and simply focus on being creative. His start-up, Apptory, helps individuals and businesses create and distribute content for touch-screen devices, using an intuitive, easy-to-understand interface.

Dylan Field (20, Penngrove, CA) envisions a world where people define themselves by what they create rather than what they consume. Currently stopped out of Brown University, Field is working with his former classmate Evan Wallace on making better creative tools.

Kettner Griswold (19, Bethesda, MD) and Paul Sebexen (19, Staten Island, NY) are stopping out of school to work on a benchtop genome synthesis device, which will allow individual laboratories and medical practices to synthesize large genetic constructs in-house for an unprecedented low recurring cost. This product would massively disrupt the fields of biotechnology and health care, fueling innovation and stimulating interest and research sector-wide.

Spencer Hewett (20, Bryan Mawr, PA) has an insatiable passion for inventing that extends far beyond the confines of one particular industry. As a Thiel fellow, he will focus on No-Q, a fusion of radio-frequency identification (RFID) and mobile payment technology that will eliminate both checkout lines and shoplifting.

Yoonseo Kang (18, Mississauga, ON, Canada) recognizes that society’s potential for innovation and abundance can only be achieved if knowledge and the factors of production are accessible for everyone. With that in mind, Yoonseo sees open-source hardware as the key for enabling communities around the world to vastly increase their productive potential and together engage in strategic economic collaboration. To that end, he is working with Open Source Ecology to develop the Global Village Construction Set, the 50 industrial machines that it takes to build a civilization with modern comforts.

Jimmy Koppel (20, St. Louis, MO) has a passion for software engineering – and a plan to make it much more efficient. Modifying software today often involves hundreds of thousands of small, similar adjustments that require a great deal of time and money. James will fix that problem by developing new tools to automate the process.

Ryan Lelek (19, Schererville, IN) developed a passion for entrepreneurship at the age of 15, when he established his first “instant streaming” start-up. Now he’s dedicated to disrupting the computer industry, using new advances in hardware, software, and network technology. As a Thiel Fellow, he’ll continue to change the world by creating simple technology tools that empower people.

Ritik Malhotra (19, San Jose, CA) Ritik began programming at age 8; started a popular web forum at the age of 12 that grew to over 32,000 members; and ran a web hosting and software consultancy business at the age of 13, garnering over a 600x return on his initial investment. Now he wants to provide a streamlined way of discovering, sharing, and distributing content over Facebook, Twitter, and other social media services. As a Thiel Fellow, he’ll first work to build a service that allows users to share interesting media, scraped from all around the web, focusing primarily on user growth in order to build a thriving community.

Chris Olah (19, Toronto, ON, Canada) wants to use 3D printing to reduce the scope of scarcity. His goal: empower anyone with a 3D printer to make educational aids, basic scientific equipment, and tools that improve their quality of life. He is currently working on a project called ImplicitCAD, which is a math-based attempt to reinvent computer-aided design and make it more affordable.

Semon Rezchikov (18, Hillsborough, NJ) is eager to explore how synthetic biology, nanotechnology, and social network dynamics intersect. As a Thiel Fellow, he wants to develop more flexible bioautomation technologies to improve the design cycle speed, and then use those technologies to create a library of truly reliable parts – making synthetic biology more like engineering and less like science.

Omar Rizwan (18, East Hanover, NJ) wants to change the world through the control and analysis of information. Specifically, he plans to speed up progress in the field of artificial intelligence by working on the analysis of big data sets. He will aggregate large sets of data from many different Internet sources and use them to tease out trends and draw conclusions.

Tara Seshan (19, New Fairfield, CT) is dedicated to improving public health worldwide, using technology, simple solutions, and community-based change. To that end, she is developing a tool that influences analysis of data, monitoring and evaluation, and public health decision making. As a Thiel Fellow, Tara will explore developing tools that enhance public health programs that can be implemented in low-resource settings.

Noor Siddiqui (17, Clifton, VA) is inspired to galvanize people for the good of others. As a Thiel Fellow, she will work to give students across the globe access to upward mobility – and industries access to an untapped work force – with the goal of mobilizing one billion people in the next decade.

Charlie Stigler (19, Pacific Palisades, CA) has years of experience as an entrepreneur and engineer, having written the popular open-source study application, SelfControl, and founded two Web start-ups. Now he’s working on Zaption, an application that improves the usual workflow for educators and collaborators by allowing video to be integrated into interactive Web experiences and studies. He believes this technology can help solve fundamental problems, starting with that of the U.S. education system.

Ilya Vakhutinsky (20, Fair Lawn, NJ) wants to revolutionize the way the technology and health care communities work together. He is working to create a more open and transparent health care system, drastically lowering the cost of care and empowering patients to make better decisions.

Taylor Wilson (18, Texarkana, AR) became the youngest person in history to create nuclear fusion. Since then, he has produced the lowest-cost and lowest-dose active interrogation system for the detection of enriched uranium ever developed. As a Thiel Fellow, Taylor will focus on both counter-terrorism and the production of medical isotopes for use in the diagnosis and treatment of cancer.

Connor Zwick (18, Waukesha, WI) is passionate about education – which is why he has set out to revolutionize our country’s antiquated system using technology. As a Thiel Fellow, he will focus on Flashcards+, a mobile educational platform with a base of over 1.5 million downloads that allows anyone to learn anything using crowd sourced generated content from a database of more than 400 million flashcards.