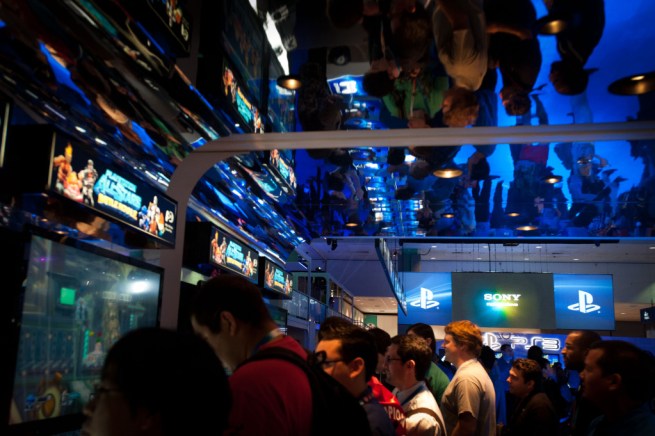 Over the course of four hours across three Electronic Entertainment Expo (E3) press conferences, hardcore gamers submitted over 16,000 real-time impressions — a valuable set of data for anyone curious as to how fans felt about the most important announcements during the gaming industry’s biggest event of the year. Now that E3 is over, we can take the time to really dig into what they liked and didn’t like, learning some interesting lessons in the process.

For this study, we counted the positive and negative comments in the hugely popular NeoGAF gaming forums, charting the reactions minute-by-minute in the graph below. The basic rule of thumb: the more positive responses, the higher the reaction score and vice versa. In short, Sony received the most positive responses, well ahead of Microsoft and Nintendo…but the publisher didn’t exactly impress everyone.

Click for a full-size version. For a more detailed explanation of how we analyzed this data, please see the explanation at the end of this article.

What NeoGAF liked about the Sony press conference

NeoGAF reacted strongly to the following games: Assassin’s Creed III: Liberation, Assassin’s Creed III, and The Last of Us (for more on these or any products mentioned here, click the tags below). While they responded positively at first to Beyond: Two Souls, PlayStation All-Stars Battle Royale, Far Cry 3, and God of War: Ascension, opinion soured soon after their first mentions.

The community also reacted positively to Jack Tretton, president and CEO of Sony Computer Entertainment of America, and Kaz Hirai, president and CEO of Sony Corporation. Both have become heroes to the video game community. David Cage, founder of Quantic Dream (Heavy Rain, Beyond: Two Souls), also received good feedback, if not as strong as the two Sony personalities.

The most positive reaction of the show came at the end of the The Last of Us demonstration. The presentation concluded with the game’s protagonist killing his enemy with a brutal shotgun blast to the face, at which point the community exploded with shock and amazement. In fact, this single moment would prove to be the most popular across all three press conferences. One could say that The Last of Us “won” E3 — an expression gamers are very fond of using.

As noted, NeoGAF responded poorly to long demonstrations, and goodwill for games quickly evaporated as they continued. The group gave mixed responses when Sony discussed PlayStation Plus and PlayStation 1 games coming to the handheld Vita.

The most negative reaction of Sony’s press conference occurred during the Book of Spells demonstration. The community complained throughout this Wonderbook presentation, and comments hit a low point during the eighth minute of the Book of Spells segment. They cited a variety of factors for their displeasure: that the game is for kids, it was motion controlled, it was augmented reality, it was boring, and the demo was too long. In fact, the segment was so unpopular that members posted 943 negative comments during the 11 minutes Sony featured Book of Spells, compared to 103 positive comments. It didn’t help that the live demo had technical hiccups, and the game didn’t work for a brief moment.

For more on how NeoGAF reacted to the E3 press conferences, check out the Microsoft and Nintendo studies.

How the scoring works

NeoGAF hosts a single message board thread for each press conference, where dozens of members comment throughout each show. I graded each comment as positive or negative, giving them scores of 1 or -1 respectively. Then I totaled the sum of these reactions for each discrete minute and plotted in the above chart. A high score means that the NeoGAF community liked what they saw; a score close to zero represents mixed reactions; and a low score means that they were not enjoying the show at that moment.

Some notes on how I scored each response: