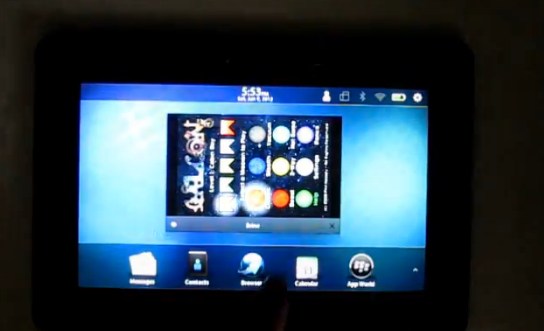 Here’s something that will likely annoy Apple to no end: one intrepid developer has managed to get iOS apps running on RIM’s BlackBerry PlayBook tablet.

A developer calling themselves “businesscat2000” posted a series of videos to the CrackBerry forums over the weekend, showing off iOS aps like Super Monkey Ball, Tom Tom, and more running on the PlayBook. Understandably skeptical, Kevin Michaluk at CrackBerry eventually pressed the dev for proof, who validated his work by performing some live tests on iOS-only apps.

Michaluk had the developer write out “Hi CrackBerry” on the SketchBook Mobile iOS app, as well as run the iPhone app for the site iMore. By successfully completing those tests, the developer proved that he wasn’t just playing videos of iOS apps on the PlayBook — the hack is the real deal.

Businesscat2000 also released a video showing off their iOS player running Angry Birds on Windows. The developer says they do most of their development on Windows, and explained in the CrackBerry forums how they got iOS apps working on the PlayBook:

The CPU isn’t emulated on Playbook (though it is on Windows). It works very similarly to how WINE works to run Windows applications on Linux. The app binary is mapped into memory and imports are resolved to point to my own implementation of the various APIs needed. iOS actually uses a few open APIs already, which Playbook supports just as well (GL ES, and OpenAL). The bulk of the work has been in implementing all of the objective C classes that are required. The ARM code of the applications run as-is – the armv6/v7 support on PB/iDevices are pretty much identical, and the code is designed to run in USR mode. No SWIs, GPIO accesses or any of that kind of shenanigans.

While it’s not the sort of thing RIM will ever officially support (or Apple will allow), it’s still a pretty cool accomplishment. If anything, it means you’ll eventually be able to stop using your BlackBerry PlayBook as a doorstop (for a few hours, at least).