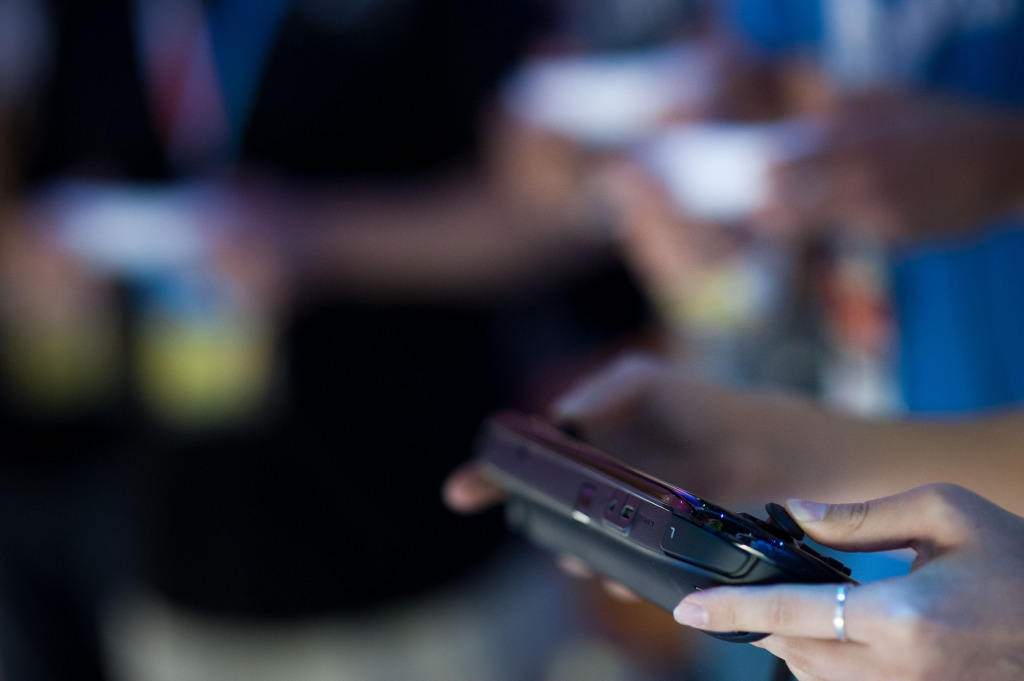 Was it SmartGlass that first tipped you off? How about the Wii U’s new GamePad? The promise of the Sony PlayStation Vita cross-play games? How about the huge number of traditional console game companies showing off their latest entries for the mobile arena of smartphones and tablets from Apple to Android? This year’s Electronic Entertainment Expo (E3), a sprawling, industry-only conference of the biggest names in video game entertainment, has gone mobile in a big way.

The big three gaming console developers — Sony, Microsoft, and Nintendo — all want to get gamers playing on smaller screens as well as the traditional humongous ones. There’s even an info-graphic showing the potential market of console gamers who already use a tablet or smartphone. It makes a ton of sense to include mobile technologies to keep people in front of big screen televisions and, hopefully, console video games. 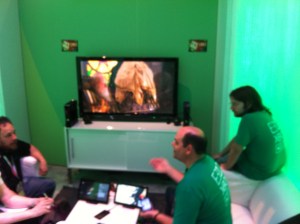 Above: A Microsoft representative demos SmartGlass tech for a group of attendees

Everywhere we looked at the Expo this year, we saw iPads, Tegra tablets, iPhones, and Android phones of all stripes. We saw PlayStation Vitas connected to PlayStation 3s, tablet computers connected to Xbox 360s, and the new GamePad from Nintendo connected to their new console, the Wii U.

This is in addition to the literally massive number of smaller screens around both expo hall areas, with Japanese social gaming giant Gree competing across the aisle with WeMade Games, a new Korean mobile gaming initiative that seems just as large, just as aggressive, and in some ways, a little higher in gaming quality.

“I’ve never thought about E3 as my industry before,” said Gavin Bowman, a mobile developer known for smaller, more casual titles at his company, RetroDreamer. “But this year, I finally feel like I’m doing the same thing as everyone else, that this IS my industry.” Bowman just released a new casual game onto iOS this past month called Duckers.

This year, Microsoft wowed the audience at its press conference with SmartGlass, not a new material for making smartphones but a way to move your gameplay from console to smartphone or tablet and back.

Yusuf Medhi, chief marketing officer for Microsoft’s Xbox gaming business, expressed his company’s willingness to use potentially competitive mobile platforms for the SmartGlass initiative by saying, “I think the decision to take an approach that says, embrace the world of smart devices, the billions of smart devices that exist today, and build a platform and a technology and a user experience across those, is absolutely the right call for the consumer, for the industry, and for us. Because what’ll happen is, I think we’re going to get traction here that will expand the Xbox business in a dramatic way.” 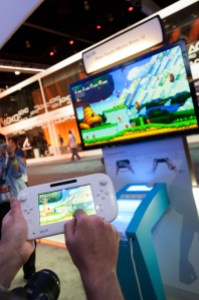 Above: An E3 attendee checks out the latest second screen initiative from Nintendo: the Wii U GamePad

Nintendo showed off its new Wii U gaming console, still focusing on the innovative GamePad controller that has a touch-enabled screen embedded in it between the control sticks and buttons from a more traditional controller. Let’s not forget the 3DS, either, a successful dedicated handheld gaming device.

Sony PlayStation Vita is itself a slick piece of hardware for console-level gaming on the go, both as a remote play controller for several PlayStation 3 titles and as the most powerful dedicated gaming device on its own.

What is also fairly stunning is the number of mobile games being brought to market by giants of the PC and console gaming market. Majesco, maker of PC and console games, is here showing off several mobile games that it hopes will do as well or better than its core business. EA has focused a lot of its money and energy on a range of mobile titles, going so far as to acquire the premier mobile gaming publisher, Chillingo, a couple of years ago.

What really brought the mobile gaming explosion home, however, happened in the South exposition hall, where two giants of mobile gaming, Gree and WeMade, had enormous booth areas directly across from each other. Instead of catapults or cannons waging war across the aisle, they are using sound and huge screen monitors to show off their high-end, console-quality mobile games that are looking more and more like their big console brethren. Gree and WeMade are both banking, quite literally, on the incredible volume of players who want their gaming on the go.

“I think the most important point is the fact that the writing is on the wall: The mobile market is going to be bigger than the console market,” said Gree’s CEO Yoshikazu Tanaka, in a conversation with PocketGamer.biz that echoes that of other executives at Gree. “If you think about it, there are 200 to 300 million consoles out there, and by comparison, a billion smartphones. So, already, the market size is pretty much 10 times the size of what we have on consoles.”

When asked for comment, members of the Entertainment Software Association (ESA) were unwilling to quantify or make an official statement about any increase in the number of mobile market vendors or offerings at E3 this year.