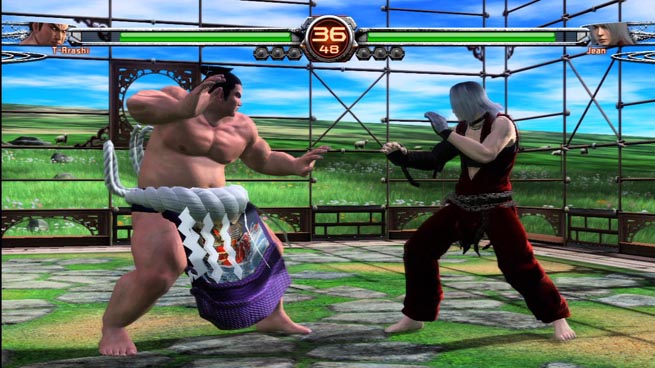 Virtua Fighter 5 is getting pretty long in the tooth. The original version hit Japanese arcades in the summer of 2006. Console versions came home worldwide less than a year later.

Now, Sega offers to sell us a mildly upgraded version of a product that’s more than five years old. It’s a testament to what a solid fighting game this is that they can just about get away with it.

Virtua Fighter 5 Final Showdown has some irritating flaws, especially thanks to an oddball pricing structure. At the core of it all, though, lies some of the best 3D martial arts around. That’s enough to make it worth a download.

Three buttons and that’s enough
Virtua Fighter was the first 3D fighting game to draw a real following, and it’s still the conservative, old-fashioned choice in the genre. VF has never been big on visual flash. It doesn’t have swords or guns or crossover guest stars. It doesn’t have any control buttons beyond the basic punch, kick, and block.

What it does have, buried under those simple controls, is amazing complexity and depth. Each character has a massive, distinctive move set. Detailed animation lets everyone react to different attacks in different ways. The varying shape of each arena exerts a subtle pressure on every fight. You can slam through hundreds of matches and still keep learning new ways to play.

VF5’s age gives it one great advantage — the game system has been thoroughly tuned and balanced after so many years of player feedback and patching. Sega’s online code runs beautifully so far, too. Multiplayer matches are easy to set up and completely lag-free. 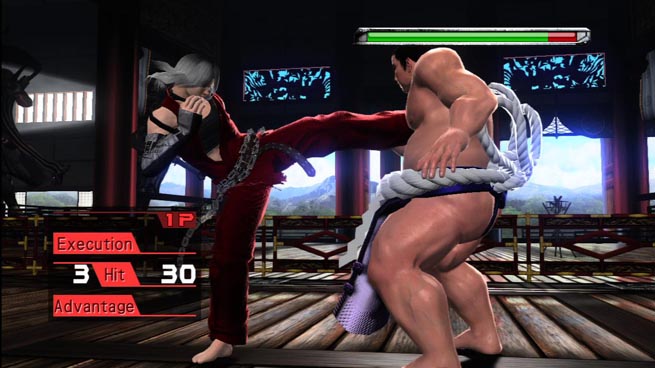 Sumo, the greatest sport on earth
Final Showdown adds two new characters to the console Virtua Fighter lineup (making 20 all told, if you’re counting). The smaller newcomer, Jean Kujo, we can take or leave. His karate fighting style is pretty straightforward and as a visual design, he’s nothing new. The arrival of another long-haired prettyboy in a Japanese video game is no longer exactly a dog-bites-man kind of event.

Taka-Arashi, though, the towering monster sumo wrestler? This is a fighter we can have some fun with. His animation gives him an awesome sense of weight and bulk — he moves with the momentum that you’d expect from a guy weighing in at nearly a quarter-ton — and he hits with an impact to match. At the same time, though, Sega didn’t ignore the comic potential of a sumo wrestler competing in a no-holds-barred fighting tournament. Taka has the funniest post-match routines and voice clips in the game.

Paying extra for more of the single-player game
In its simplest form, Final Showdown comes with a well-done training mode and some basic single-player challenges. If you want the entire solo game, however, things get complicated.

For those who missed the announcement, here’s a recap. Final Showdown, the basic game, costs 15 dollars. Downloadable character packs, with hundreds of costumes and customization items, cost five bucks per fighter. Alternatively, you can buy the entire cast’s worth of downloadable content (DLC) in two combo packs, each priced at 15 dollars. Buying everything — that comes to 45 dollars — unlocks the “Special Sparring” mode, a la the Kumite or Quest modes from earlier Virtua Fighters, where the game runs out an endless wave of creatively costumed A.I. opponents.

The pricing setup makes sense on a basic level. More content costs more money. Sure. Look at it from the perspective of the kinds of players who might buy it, though, and the situation gets a little cloudy. 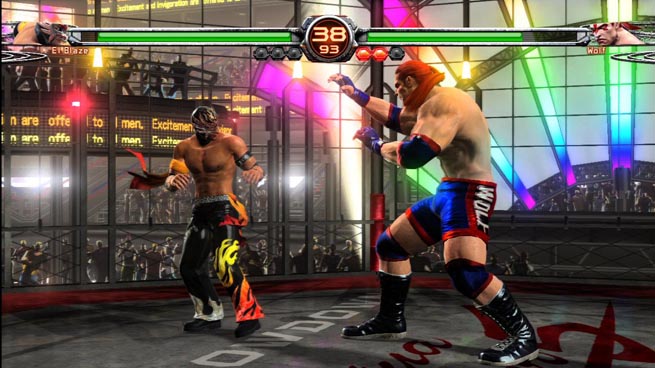 Die-hard competitive fighter fans get all they want from the $15 bare-bones package. They get all the characters, they get the training mode, and they get multiplayer. They can proceed directly to beating each other’s brains out online.

Casual players, on the other hand, who’d like to learn the game through the sparring campaign and have a laugh dressing up their characters? They have to pay extra. There’s a weird kind of irony happening here, where the cheapest version is geared to appeal to the players who are most likely to spend any amount of money on a new Virtua Fighter.

Final Showdown is still a hell of a game. It’s hard not to look at that combo price tag, though, and remember that Virtua Fighter 4 Evolution — a physical disc with a complete suite of engrossing single-player modes — came out the better part of 10 years ago and cost only 20 bucks. For that matter, a used copy of Virtua Fighter 5, also with a loaded Quest mode, can be had for pocket change nowadays.

And the single-player game is important
Those competitive die-hards may scoff at all this and wonder why anybody would want to fight against the computer. If you haven’t been following the series for 20 years, though, and you don’t already know it backwards and forwards, the multiplayer game is a lousy place to start learning Virtua Fighter.

After all, the nature of VF competition is such that it is very unfriendly to newcomers. The fighting system has a steep learning curve, and while matchmaking can compensate to some degree, the online population is overwhelmingly dominated by hardcore players. Newbies signing on for a quick match will get massacred, over and over again.

It’s no fun playing human heavy bag for a veteran VF master who knows how to reverse every move you try. Earlier VFs recognized that and gave new players compelling ways to learn the game on their own.  That’s why it would have been nice to see a more complete version of Final Showdown come at a more reasonably balanced price. 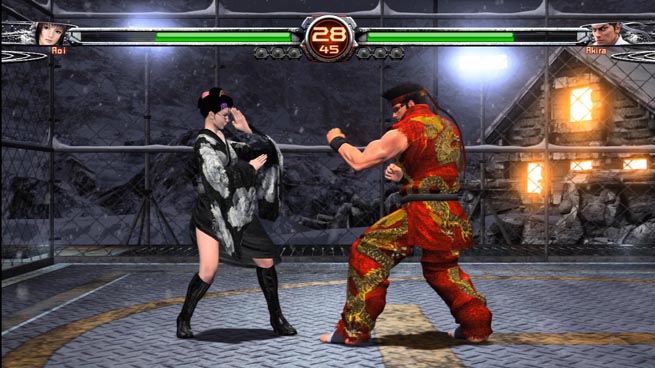 Not much to achieve
It’s a small thing, but Sega could at least have spiked the solo modes with some interesting trophies and achievements. As it is, the achievement lineup in Final Showdown is a big ball of nothing. The basic challenges amount to simply turning on a game mode. The hardest are still easy enough to knock off in an evening.

Some of the advanced moves in Virtua Fighter take real skill to pull off. Why not hand out an achievement for mastering the timing on Akira’s Stun Palm? Why not use some trophies as an incentive to teach players high-damage combos? If you’re going to offer achievements for doing stuff that takes no effort, you might as well not even bother with them at all.

Yes, this review contains a lot of complaining. We complain because we care. Virtua Fighter 5 is a very good game, and Final Showdown makes it better in many ways…but it could have been even better than that with just a few reasonable changes.

As such, we have a hard time recommending the total package. Forty-five dollars is a lot to spend compared to the dirt-cheap price tags on Evolution or vanilla VF5. Both of those hold up very well and still make great entry points for new players. For 15 bucks, though, the core game is a fair deal. Taka’s almost worth 15 dollars all by himself.

Virtua Fighter 5 Final Showdown was released on June 5, 2012 for the PlayStation 3 and June 6, 2012 for the Xbox 360. An Xbox 360 download code was provided by the publisher for the purpose of this review.