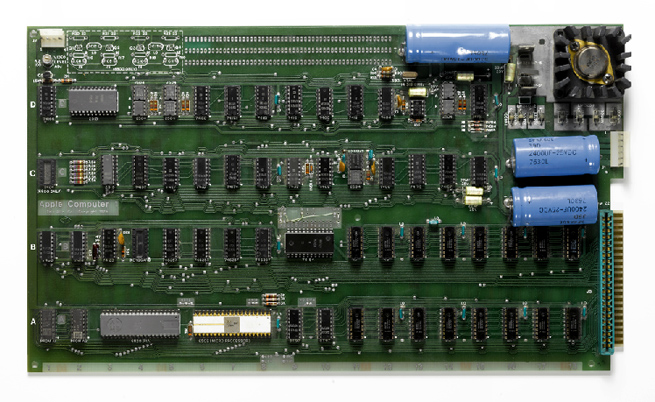 Even though it would be worth next-to-nothing without its historical roots, an original Apple 1 motherboard sold for an eye-popping $374,500 today at a Sotheby’s auction.

The motherboard, which was put together by Steve Jobs and Steve Wozniak, in many ways represents the genesis of Apple. The motherboard includes a MOS Technologies 6502 microprocessor and 8 kilobytes of RAM. About 200 Apple 1 computers were ever produced, and Apple did not become a big name in tech until the popular Apple II machine. Other big products Jobs was significantly involved with include the Macintosh, iPod, iPhone, and iPad.

Sotheby’s large description of the product includes the following bit of detail:

When Steve Wozniak and Steve Jobs presented the Apple I Computer to the Homebrew Computer Club in 1976, it was dismissed by everyone but Paul Terrell, the owner of a chain of stores called Byte Shop. Terrell ordered 50 computers for $500 a piece, insisting that the circuit boards come fully assembled rather than as DIY kits similar to the Altair, and Jobs and Woz managed to produce the requisite computers in 30 days. They continued production, immediately creating 50 additional Apple Is to sell to friends and an additional 100 to sell through vendors, at a retail price of $666.66, a number that garnered complaints among conservative Christians, but provided a lucrative 33% markup.

Let us know in the comments if you think this iconic piece of tech was worth more than $300,000.