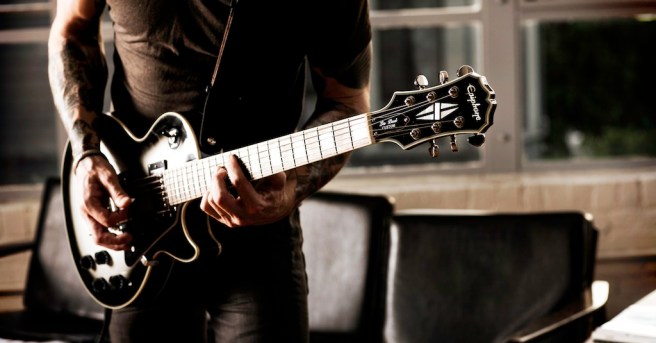 The lights were low; the volume was high. The screaming solo runs coming from the stage matched the notes on the screen. Three would-be rock stars stood facing the cheering throng — one bass player, one lead singer, and one rock guitar player.

This wasn’t a concert, but a live video game demonstration booth at Los Angeles’ Electronic Entertainment Expo (E3) for BandFuse: Rock Legends, a new video game that promises to put players center stage and teach them how to play a real instrument.

Across the huge convention hall lay the gigantic city-state booth of Ubisoft, the publishers of Rocksmith, the original “play a real instrument” game that offers the same deal.

Both titles allow players to connect their real-life axe to an Xbox 360 or PlayStation 3 console to interact with the music. Both have their own system of teaching budding or novice musicians the basics to the advanced techniques of playing rock guitar. Which one is better? Though both developers GamesBeat spoke to pushed their specific product, it may all come down to an individual player’s learning style or ultimate goal. I’ll compare the two based on my limited time with each game below, with a quick nod to the game I feel is best in each category. 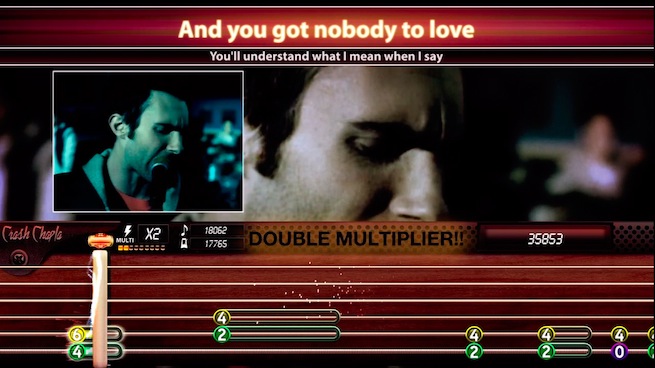 Both games come with hardware for connecting a guitar, bass, or (in the case of BandFuse) a microphone. Both connectors seem solid, though the Rocksmith doohickey seemed a little less solid to my eyes. BandFuse can connect up to three instruments at once, which seems like a great thing for budding bands who want to practice together in a smaller space. UPDATE: Paul Cross (@crossieRS) let us know that Rocksmith can connect two mics and two guitars at the same time, with bass coming soon.

BandFuse uses tablature, a simplified notation system that musicians use instead of traditional sheet music. It denotes finger placement rather than the pitch of notes, making it more user friendly than traditional musical notation. It’s a popular way to transcribe guitar music, with files that are easily found across the internet.

Rocksmith, on the other hand, uses a visual metaphor that looks much more like a traditional rhythm game, like Guitar Hero or Rockband, with big primary colored rectangles that move down toward the player on a stylized guitar neck. I was able to play this game more easily, due to the visual way the notes are presented on screen. Trying to jump in and sight read tablature can be tricky, but the RockBand style notation made a lot of sense to my brain, allowing me to play the lines without having to look at my fingers. 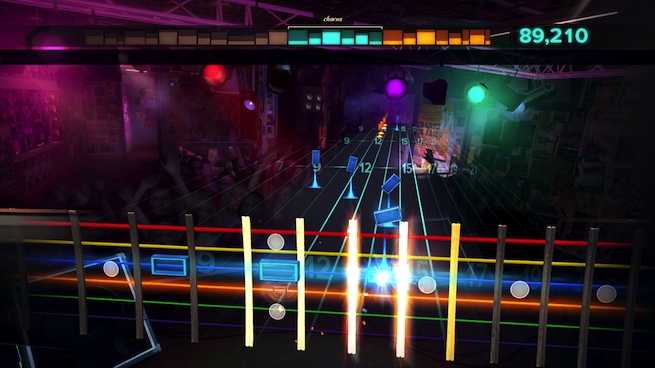 Rocksmith’s teaching system changes difficulty on the fly with a dynamic difficulty system. While playing, I noticed the notes I was expected to play got more numerous and the arrangement more complex as I hit the right notes. When I missed notes, things got a lost simpler. There are some sophisticated algorithms in there to help players stay at just the right learning level. BandFuse has a more traditional difficulty system; players press a button on the controller to change the difficulty setting on the fly. Winner: Rocksmith.

The Effects of Delay
Advantage: BandFuse

Latency is a measure of how long the delay is between the time a string is plucked on the guitar and when the sound is heard through a listening device, like an amp, headphones, or – in this case – a gaming console.

I could hear and feel a short latency when playing Rocksmith. Lead audio designer Nick Bonardi said that they have optimized the game to a short 40 millisecond delay, which he said was well within an acceptable limit. He also pointed out that most home theater setups could introduce delay within themselves, further complicating the issue. In my time with BandFuse, there was no noticeable delay – whether that is a function of the hardware or the software, I’m not sure and BandFuse rep Jon Heiner wasn’t saying.

While both BandFuse and Rocksmith use real instruments connected to gaming consoles to both engage and educate both novice and more advanced guitar and bass players, they each play to their own specific strengths.

Which game you choose will be a function of how you learn, and how much latency bothers you. If you’re a new musician who wants to transition from the fake plastic instruments of RockBand or Guitar Hero, Rocksmith may be the way to go, with its visual presentation and dynamic training system. If being able to transfer your skills to a non-game setting is important, and you have a hard time dealing with latency, BandFuse might work better for you.

BandFuse: Rock Legends, from Realta Entertainment Group, is finishing development now, with a planned release for January 2013 on the Xbox 360 and PlayStation 3. Rocksmith, published by Ubisoft, is available at retail outlets now for Xbox, PlayStation and PC.