Sorry, NASCAR fans. Probably the most important motorsport event in the world is 24 Hours of Le Mans. It’s the world’s oldest continually-running car race, and somewhat surprisingly this year, four of the top six contenders are hybrid cars.

Two are from perennial all-star team Audi, and two are from a team that’s been absent for a decade: Toyota.

That’s why it’s important that hybrid cars are appearing — and performing — in the most demanding automotive conditions imaginable. Technologies developed here are making their way to the daily driver car, and the research and development costs are borne by high-profile racing teams.

Both the Audi and Toyota teams are using regenerative braking systems to achieve the hybrid designation. During hard braking before a turn, the cars capture some of the energy used to decelerate and then apply that energy to the wheels to help the car speed up again after the curve. 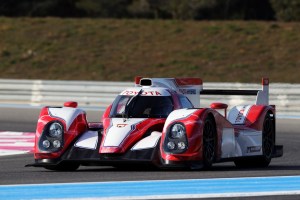 The Audi hybrid system is partially mechanical: as the R-18 e-Tron hybrid quattro slows, a flywheel spins up, grabbing some of that energy, which is converted into electricity and then applied to electric motors driving the front wheels. The Toyota system is a little different — it stores power in a capacitor and then applies energy to the rear wheels.

Early results for the hybrids have been good: As of hour eight, one of the hybrid Audis is leading, and until a crash caused by another driver, one of the Toyotas was in third place. The other Toyota briefly held the lead until a mechanical issue dropped it into the pits.

Few cars survive Le Mans unscathed. The race is known as the Grand Prix of Endurance and Efficiency for a reason. But it’s encouraging for people who appreciate breathable air that the hybrids are starting and running well.

This is the crash that took the first Toyota hybrid out of the race. As you can see, it is in no way the Toyota drivers’ fault: