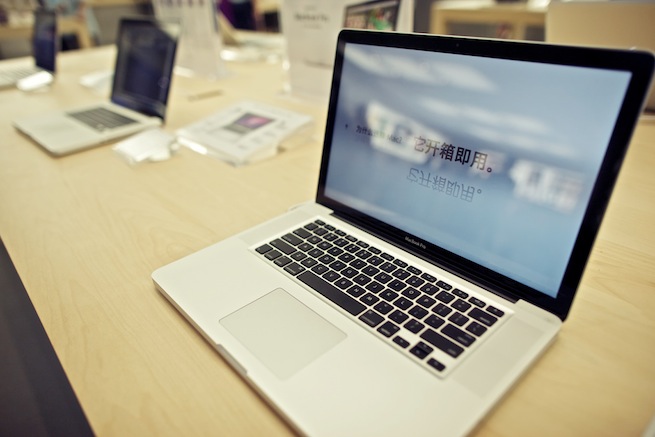 Apple knows the art of seduction. By positioning MacBook screens to perfect viewing angle in its stores, the company is subtly seducing you into laying down a couple thousand dollars to take that sleek gadget home.

Before any Apple-Store lurking fanboys get their hands on a MacBook, Apple Store employees meticulously open each display computer to a 70 degree angle before the store opens, reports Forbes. Equipped with an iPhone app, the employees tilt each display screen to the best-possible viewing angle.

You might think that Apple positions all its notebook computers for aesthetic reasons. That’s partly true. The tables are uncluttered and the products are clean. But the main reason notebook computers screens are slightly angled is to encourage customers to adjust the screen to their ideal viewing angle—in other words, to touch the computer!, writes Forbes’ Carmine Gallo.

Using a precise screen angle is just one tactic Apple uses to make a sale. Apple Stores’ clean layout is designed to showcase its world-famous products. The company wants its popular device design to shine in front of a nondescript white and light-wood backdrop.

Gallo’s article mentions the differences between how Apple Stores and Best Buy display their merchandise. I’m reminded of the few misguided times I’ve purchased a PC laptop at a big-box store where the device was thoughtlessly displayed next to several other models. I had to hunt around for prices and specs while trying to open and close the laptop that was connected to a cumbersome security device. Often the laptop wasn’t turned on or connected to a power source, so I couldn’t even test it out.

Apple on the other hand, strategically lays all the information you need out for you right in plain sight. There are no obtrusive security devices that get in the way of Apple’s design. And even Apple has its hands in Best Buy, creating a separate space from PC models that looks like a mini Apple store. The company emphasizes what Gallo calls the “multisensory experience” —  the way you can interact with Apple products in the store the same way you would in the real world.

It’s also no mistake that Apple lets you stand in a store for hours playing with its computers, iPads, and iPhones. The more you play around with its gadgets, the more you’ll fall in love and have to take one home with you, Apple hopes.