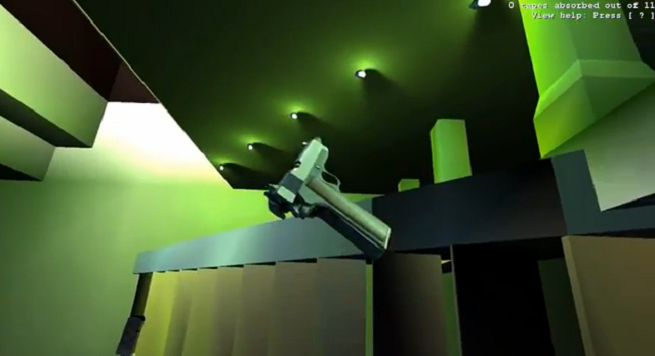 In seven days, developer Wolfire Games constructed a first-person shooter, titled Receiver, more interesting than most of the competition. How? By restoring the “power” in firepower.

Receiver’s design bills itself as an exploration of “gun handling mechanics, randomized levels, and unordered storytelling.” Armed with but a pistol and a tape player, you wander the spartan corporate corridors and passageways of a mysterious complex.

Here’s where Receiver stands out: Its room design and layout changes every time a new game begins. The normally one-dimensional pistol transforms into a lesson in micromanagement, as every part of actually operating a firearm comes into play before pulling the trigger. You’ll need to load bullets in the pistol’s magazine, insert it into the weapon, then cock the hammer — all actions that are performed automatically (sometimes with inhuman speed) in other games but are a completely manual affair in Receiver.

Run-and-gun comes full stop in Receiver as well, for if its army of robotic drones and turret emplacements sink a bullet into you, it’s a permadeath game over. Checking your ammo count involves eyeballing your remaining bullets within a clip, and the absence of a user interface’s comforting presence increases tension within the lonely environment.

Receiver costs $4.99 and is available through Wolfire’s website for the PC and Mac. It also comes free for customers pre-ordering Wolfire’s upcoming title Overgrowth.