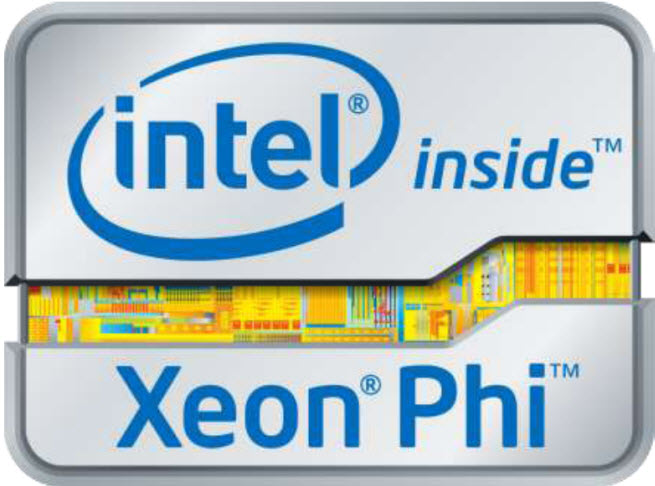 Once you give a product a name, it seems like it is more likely to see the light of day. Intel is announcing today that it has created a new brand, dubbed Intel Xeon Phi, for a new kind of supercomputing chip with more than 50 cores, or computing brains, on a single chip.

The Intel Xeon Phi is the name for chips coming out of the project code-named Knight’s Corner. Rajeeb Hazra, vice president of the Intel architecture group and general manager of technical computing, said in a media briefing last week that the first Intel Xeon Phi chips will be in production by the end of the year. The world’s biggest chip maker is introducing the brand at the International Supercomputing Conference this week in Hamburg, Germany. The market segment for this category, dubbed high-performance computing, is expected to grow 20 percent a year for the next four years, providing a considerable boost to overall data center server chip sales.

This chip family has had a long history. Intel is still the king of conventional server chips under the Xeon family, with one to eight cores on a chip. But the Xeon Phi chips have scores of cores on a single chip. The chips originated with Intel’s Larrabee project, which was supposed to lead to chips for video game consoles such as the Sony PlayStation 4. But Intel canceled Larrabee and rechristened the project for the supercomputing market. Now the mission of the Xeon Phi chips is to head off a competitive threat from graphics processing units (GPUs), which are being used with increasing frequency in supercomputers. 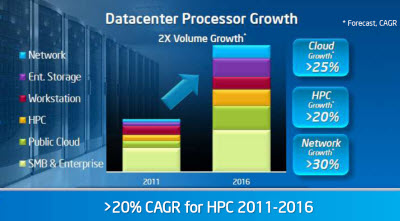 The GPUs have lots of small processors that can be programmed to handle non-graphics tasks. Nvidia and Advanced Micro Devices now have lots of chips in the top 500 supercomputer list. But Intel believes the programming model for its Intel Xeon Phi chips, which are dubbed “coprocessors” to go with other Xeon chips, will be much easier than programming for GPUs.

“We see this family as a driver for parallel work loads, for applications with a high degree of parallelism,” Hazra said. “This is a significant brand announcement for us.”

Hazra said it took a long time for the performance of supercomputers to grow from one petaflop (a huge amount of mathematical processing power) to 10 petaflops. Now, he expects that we will go from 10 petaflops to 20 petaflops in the course of a year. (Today, the Department of Energy announced that its new “Sequoia” supercomputer clocks in at more than 16 petaflops.) The demands of many fields of research are fueling the need for this processing power. The supercomputers are becoming useful in drug discovery, renewable energy, genomics, biosciences, design and simulation, media and entertainment, national security, and nuclear safety. The goal is to go from 10 petaflops in performance today to an exaflop, or 1,000 petaflops, by 2018.

The Knights Corner chip will have more than 50 cores, be in production this year, and use Intel’s new 22-nanometer (a nanometer is a billionth of a meter) manufacturing process with new 3D Tri-gate transistors. It will have a measured performance of 1 teraflop in double-precision floating point calculations. That’s just for a single node, or one machine. In a cluster of nodes, Intel says the performance can reach 118 teraflops, or enough to make it into the ranks of the top 500 supercomputers in the world. While the Intel Xeon Phi is a companion processor, it will be able to boot its own operating system and run complete applications in a network node on its own.

Peter Ungaro, chief executive of supercomputer maker Cray, said his company is designing a supercomputer with the new Intel chips. He said the company already has a couple of customers for the new supercomputer.