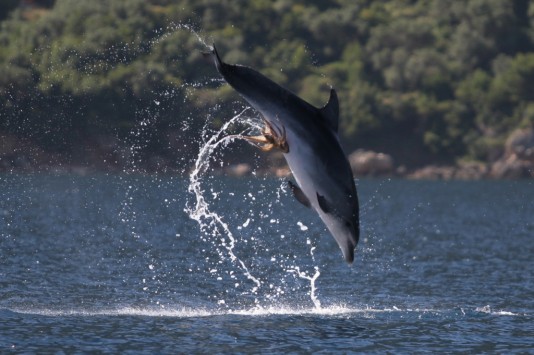 A recent viral story about an octopus taking a joyride on a dolphin struck me as the perfect capsule review of Microsoft’s new Surface tablet. Somehow, a cephalopod attached itself to a dolphin’s nether parts — right on its genital slit, uncomfortably enough — and the dolphin was leaping vigorously into the air in an effort to dislodge the unwelcome embrace.

It’s a great metaphor for what Microsoft is doing right now.

Think of the octopus as Microsoft’s increasingly useless PC manufacturing partners, who despite repeated attempts at intimate relations with Microsoft, can’t seem to produce anything useful, probably because they’re a totally different species.

And Microsoft, which used to be a sleek, streamlined company, optimized for surfing market trends, finds itself in an awkward position — being dragged down painfully by the genitals, if you will, by its partners.

HP and Dell, for instance, have tried to make tablets — many times — and just can’t seem to get them right. Google is undercutting Microsoft’s mainstay, operating systems, by giving away its own OS for free. And Apple moves from design triumph to design triumph, making the most of its hardware and software prowess while making Microsoft look ever more clueless and old-fashioned.

The fact is, Windows 8 is a promising operating system (as is Windows Phone 7) with a ton of innovative design and a shockingly radical re-imagining of the Windows experience. It’s a bit hard for people to get their heads around Windows 8’s user interface. Once they do, though, it’s remarkably well-suited to a touchscreen world, or even better, for a world where you sometimes use a touchscreen and sometimes use a keyboard.

But Microsoft knows that Windows 8 won’t have a chance if there’s no amazing hardware to show it off. With its OEM partners about as useful as an octopus on a dolphin’s genital slit, the company knew it had to take matters into its own hands. So Microsoft pulled out all the stops and designed a pair of tablets that look pretty good, actually.

I can imagine the meetings in Redmond, where things finally came to a head, and chief executive Steve Ballmer finally just pounded the table and yelled, Screw it, we’ll just make our own damn tablet!

Will it make the difference between success and failure? I doubt it. Android has a growing share of the tablet market and is just about to surpass the iPad. Google and the manufacturers using its Android OS can compete on price all day long. Apple dominates on customer satisfaction and has the advantage of being the standard-setter for ease of use and interface.

Microsoft, meanwhile, has the challenge of convincing customers to try out a whole new paradigm. It’s starting from miles behind both Apple and Google in the tablet and smartphone markets. And the traditional PC market is increasingly irrelevant.

With the Surface, Microsoft has made a beautiful, dolphin-like leap of creativity. Unlike the real bottlenose, however, I’m not sure that it’s going to be able to easily be rid of its unwanted attachments.

While I like and admire the dolphin a lot, in this case, my money’s on the octopus.