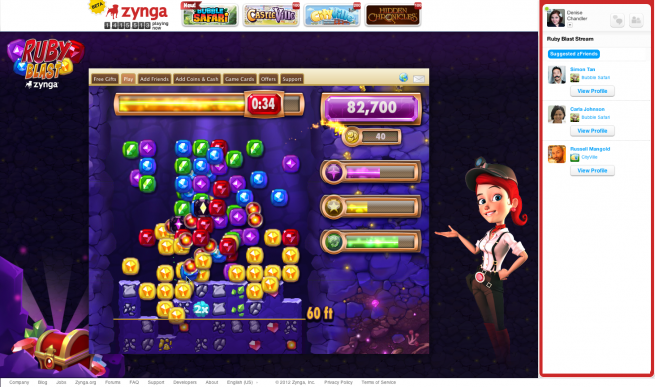 Zynga’s latest social game, Ruby Blast, combines the match-three action found in games like Bejeweled and Diamond Dash and mixes in a bit of mining. Gamers play as Ruby Stone, traveling the world and looking for mines full of gems. Matching and clearing rows of stones sends Ruby further into the cave where various powerups and rare items lurk.

While Ruby Blast is a step toward more technically sophisticated design for Zynga, it also embodies the company’s focus on developing simple, easy-to-play titles that appeal to a variety of players.

Ruby Blast uses both social and global leaderboards, allowing players to compete against friends or take on strangers. When playing the game on Facebook, pictures of your friends will appear as you approach their top score. This is a more goal-oriented twist on a traditional leaderboard.

Ruby Blast goes live later this week on Facebook and Zynga’s website. It is the first collaborative project between Zynga Beijing and Zynga Seattle.