There are good times to start social media marketing campaigns, and there are absolutely horrible why-on-earth-would-you-choose-that times. How’s a savvy online marketer to know which is which?

YesMail Interactive ran a comprehensive three-month study of consumer social engagement with online campaigns for 20 major retails brands, including Abercrombie & Fitch, The Gap, Ralph Lauren, American Eagle, J Crew, and Forever 21. It discovered some astonishing insights which it’s sharing with the world … such as why Tuesday is such a great day to kick off a campaign.

VentureBeat spoke to Michael Fisher, president of YesMail, to get the details.

One glaring issue: Most social marketing campaigns are deployed on Fridays. But campaigns deployed on Tuesdays get the most engagement: 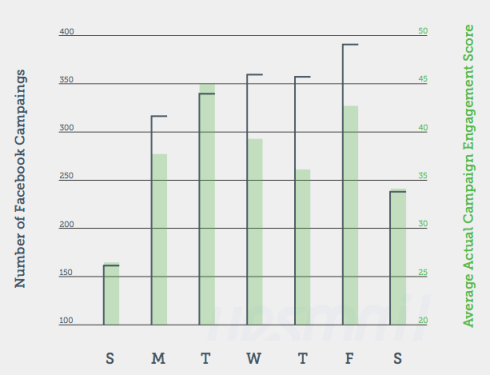 Above: The line bars are #s of campaigns, the green fill indicates level of engagement

This would seem to indicate that not only is Friday a bad day to start a campaign (many campaigns, little engagement), but that Tuesday is the best day (less clutter, better results). But Fisher was quick to point out that timing isn’t just about “the best day” you read about in some blog post, such as this one.

Instead, it’s individual to your company, your customer demographics, what’s happening in the industry, and what’s going on in consumers’ minds. For example, if you are the Golf Channel and you see there’s a sale on clubs by a major manufacturer, piggyback on that promotion by offering a subscription to anyone who has just purchased clubs.

Another finding: Fewer campaigns can be better.

In fact, the five most engaging brands in the study, Ann Taylor, The Limited, Ralph Lauren, Eddie Bauer, and Banana Republic, deployed about half the campaigns of the least engaging brands … brands like Forever 21, Urban Outfitters, H&M, and the Gap.

Learn from your colleagues

One of the surprises in the study is that some brands within the same corporate family have wildly varying success rates.

For example, Banana Republic has a massively outsized engagement ratio given its relatively small social media footprint: 74,000 likes on Facebook, 5,500 followers on Twitter. Corporate sister The Gap (both are owned by parent company Gap Inc.) has almost 2.5 million fans on Facebook and 154,000 followers on Twitter, but, on a per-fan basis, the brand has a much worse engagement ratio: 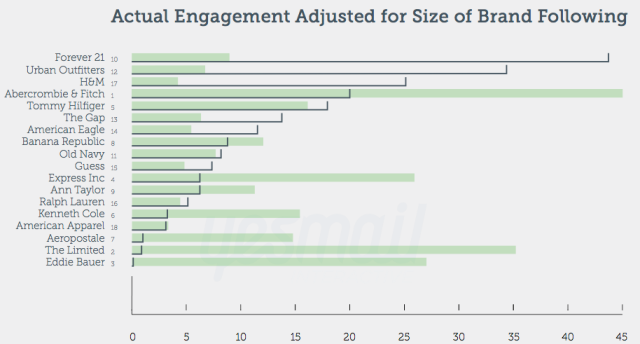 “Why is The Gap having less success than Banana Republic?” Fisher asks. Clearly, there are some social media learnings that are not being adequately shared across the corporation.

YouTube was a startling case for the YesMail study. It was the only social network where campaigns increased steadily over the three months of the study while engagement decreased at seemingly similar rates: 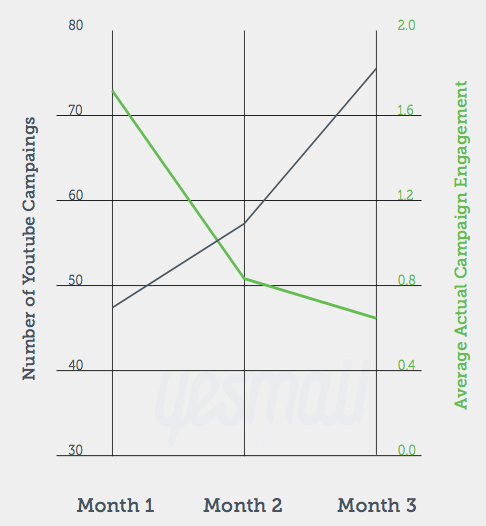 The conclusion? Creating a great YouTube campaign is not for the unprepared. Nor can marketers just throw any old video they happen to have lying around onto YouTube in hopes it will somehow magically go viral.

The study suggests that factors increasing the success of YouTube campaigns include celebrity guest stars, incentivized user engagement (with prizes for commenting or posting in response), and interesting, odd titles that viewers have to click on to understand.

Decide based on customers, not marketers

Time of day can be as important as day of the week. But a brand’s decision about when to send out a campaign is often more dependent on when it’s ready, or when the actual marketers are on the job, than when customers would be likely to engage.

“Marketers often send out campaigns when they’re at work,” Fisher notes. “But people buy when they are not at work.” 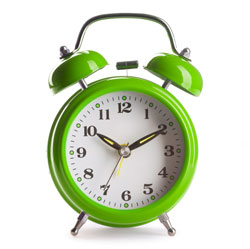 And, as we know, social media has flipped the power from the marketer who previously could control when the message would be consumed (during, for example, prime time TV), to the consumer who will decide when she will view your message … if at all.

Of the brands YesMail studied, the best Facebook engagement was found in campaigns started between 10PM and 12AM Eastern. That was also the least-used deployment time slot. Part of the reason might be that many of these brands target college students, who tend to stay up later, and part of it might simply be the lack of other campaigns.

The best Twitter engagement was very different: The most engaging time slots for Twitter-based campaigns were 5AM-6AM and 7AM-8AM Eastern time. But over 84% of all Twitter campaigns went live between 9AM and 7PM Eastern — in other words, during regular work hours.

The point: Find good slots for your customers, not for you.

“CRM used to be customer relationship management,” says Fisher. “It should be CMR: customer manages relationship.”

YesMail Interactive is based in Portland, Oregon, with offices in  Chicago, Atlanta, LA, San Francisco, and Omaha, as well as international locations in London, Singapore, and Toronto.