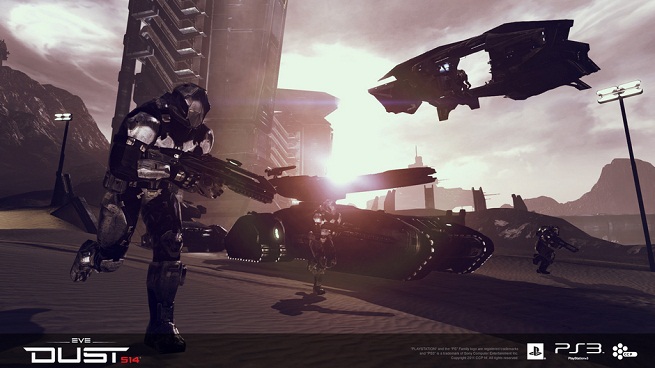 As far as solutions go for the ongoing debate ong the cost and business models of console games, developer CCP Games might just emerge the victor in elegance. The timing couldn’t be better for its latest project, Dust 514, the first free-to-play first-person shooter exclusively for the PlayStation 3.

How did CCP pull it off? Chief marketing officer David Reid knows how, and we sought him out for answers about breaking into the console world, the proliferation of free-to-play, and the efforts taken — such as the newly announced Mercenary Pack — in drawing new players to this ambitious cross-platform venture.

GamesBeat: With recent shakeups in the industry involving Kickstarter projects and a renewed interest in free-to-play business models, how would Dust’s presence on the PS3 affect developer/publisher perceptions of what’s possible on the console?

David Reid: It’s hard to overstate how dramatic these changes within the industry really are. The notion of buying games at full retail cost or paying mandatory subscription fees for an MMO existed as the paradigm for the industry for many years. But a lot of noticeable transitions are taking place now, and those primarily begin upon the PC. It’s the most open platform, and it’s the easiest tool for experimentation and launching new business models.

That said, consoles have a much higher scope of success. This is why we’re excited about the pole position we’re in of being able to bring the PC’s innovation to consoles first, and I do expect the free-to-play business model will be a big deal on the console going forward. Of course, I don’t think it’s the total end of how premium games are marketed now, but free-to-play fits perfectly with our intentions for Dust. I wouldn’t be surprised if we’ll see many triple-A games going with this sort of launch model by next year.

GB: Dust’s integration with Eve obviously attracts players familiar with its setting, but how can it entice fresh faces?

Reid: We really do believe the typical Dust player is probably someone who’s never heard of Eve Online or CCP and who doesn’t know it’s built in Iceland. They are, however, someone playing Battlefield or Call of Duty on the console for a number of years. What we and Sony collaborated on, and what we expect to appeal to those guys, is a simple callout of, “Hey, we have a high-quality, free-to-play FPS here; why not try it out?”

They’d enjoy the same moment-to-moment experiences they’re used to…just not in the single-player sense, of course. We sort of jokingly refer to that as the “interactive video practice mode” for learning the intricacies of the game before jumping into multiplayer. Dust starts with the latter much like League of Legends’ business model on the PC; it didn’t go out there with a big campaign mode for familiarization.

So, that’s how we expect people to get started. If you enjoy Battlefield’s large-scale fights or Call of Duty’s fast-paced multiplayer, you’ll feel right at home in Dust. Ultimately, the game’s cross-platform persistence and level of skill- and item-based customization creates a really deep “rabbit hole” for players to continually explore, and that’s the hook for retaining console shooter gamers beyond the action. The game is so much richer for having all these players in it, and having millions of people on the PlayStation Network playing Dust also benefits those in Eve as well. 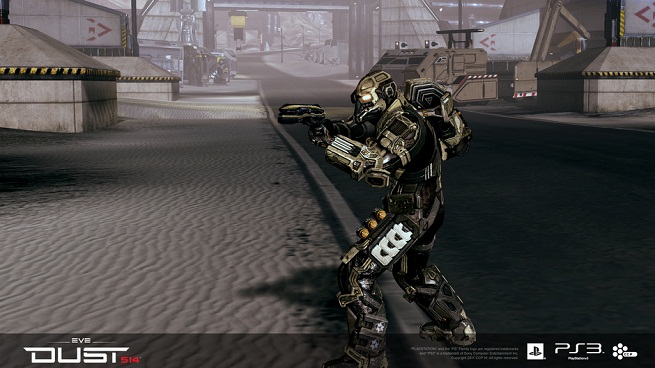 GB: It’s entirely possible that Eve could get tons of new players because of Dust?

Reid: It’s totally possible. Gamers are gamers, some more rabid than others and who play everything out there. Dust will be creating more awareness and excitement for Eve and CCP than anything ever has in terms of the number of people that this free-to-play business-model launch on a premiere console can do. We have plenty of avid shooter fans among Eve players, and we expect the reverse to be true in Dust. But we’ll also see tons of people sticking with what they know, and we can bring that within the persistent, single-shard technology we have.

It’s fascinating to think about the things some of the übergamers out there will do. You could possibly simultaneously play Eve and Dust on some sort of superhuman level, and you could use your own [Eve] ship for orbital bombardment during a [Dust] battle you’re taking place in. The most engaged gamers will find ways to really test the limits on a level of challenge and intricacy not found in other games.

GB: The microtransactional model is a relatively new phenomenon for the shooter genre, especially on consoles. How will Dust provide gamers comfortable with purchasing map packs and similarly priced DLC a hurdle over this potential barrier of entry?

Reid: We don’t think it’s such a giant leap forward beyond buying map packs or DLC or, say, Rock Band songs. If you’re comfortable using your PlayStation Wallet to manage any kind of in-game currency or using cards for adding points, then buying items in Dust’s in-game store isn’t so different. You can even convert Wallet points into [Dust/Eve store currency] Aurum if you don’t feel like spending your [Dust/Eve standard currency] Isk. The frequency of these transactions is higher than other games to a degree, but as I’ve said before, we’re comfortable this system will establish itself as a proven model. It was just a matter of time before somebody brought it to the console.

GB: Let’s talk about some of the perceived parallels between Dust and Sony Online Entertainment’s PlanetSide 2. Besides the adoption of a similarly structured business model and a tie-in with a long-established MMO, how will Dust stand out?

Reid: To begin with, we can’t stress enough the significance of Dust’s cross-platform capabilities with Eve. Eve has been around for over nine years, and it’s growing every single year – 400,000 subscribers and counting – primarily because of its proven single-shard experience in which everyone plays together and your actions shape your reputation. Forming and breaking trust between players is just as much a currency as Aurum or Isk are. You are a known entity because you can’t hide in another shard somewhere. All of that exists in Dust. The actions you take in either game adds to your overall legacy and history.

Our other unique aspect is our sandbox style mechanics. As we launch further content in Eve and Dust, we provide additional tools for players to interact in different ways and form their own personal stories. We’d rather prefer those kinds of emergent experiences over simply re-living quest text or a previously prepared story crafted by a content team. 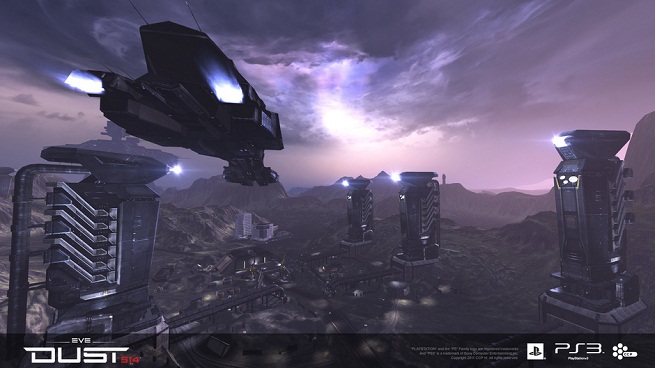 GB: As the Fanfest video shows, calling down orbital bombardments represents one type of cross-platform interaction between Eve and Dust players. What other kinds of interaction can we expect?

Reid: We’ll have cross-platform chat between PS3 and PC players, and we can’t wait to see how those two groups behave while communicating with each other. [Laughs] Dust soldiers can also take control of surface “orbital artillery” emplacements to strike back at ships dropping payloads on the battlefield. Also, there’s almost an infinite number of smaller ways for interactivity within the shared, persistent economy. Objects in Dust can be sold in Eve markets, and vice versa.

The same kind of resource funneling and financial shrewdness some players exhibit in Eve is totally possible in Dust through controlling planetary districts and conducting trade embargoes on certain resources. You can just imagine the scenarios where certain Dust clans emerge as the best team for fighting on terrestrial planets, for example, or securing gas giants. As Eve players seek more and more control for their corporations, they’ll look to Dust mercenaries to hit dirt and do the grunt work of securing planets via user-crafted contracts.

It’s more than an amalgamation of single transactions and encounters between these groups. The focus is on the metagaming side of things, and the story and the drama surrounding the bonds between Eve and Dust players.

GB: Dust gives its players the same kind of potential for peer-driven reputation as Eve does?

Reid: Exactly, and this is why it’s so exciting. If an Eve player has the capability to make themselves famous among hundreds of thousands of people purely through their actions alone, you now have the ability to increase that fame to an audience of millions with Dust. We’ve got players within our community regarded on an almost celebrity status, and now FPS gamers have the chance to tell their own stories and forge their own reputation.

We are laser-focused on creating the best possible content in Dust, but I can’t help feeling a little giddy wondering what’s next for us.

Reid: We’re going into beta with a high level of confidence in figuring out the subtle tweaks and balances in ensuring the cross-game economy avoids hyperinflation from the sheer differences of pricing weapons and armor versus a massive starship.

Another part of this tuning is all of the technical stuff lurking under the hood. We’re doing things with Sony no one else has done, and firing off an attack on the PC, having it travel through our Tranquility server in London, and appearing on the PS3 player’s screen as a rendered explosion represents an economic transaction as well and must be carefully balanced.