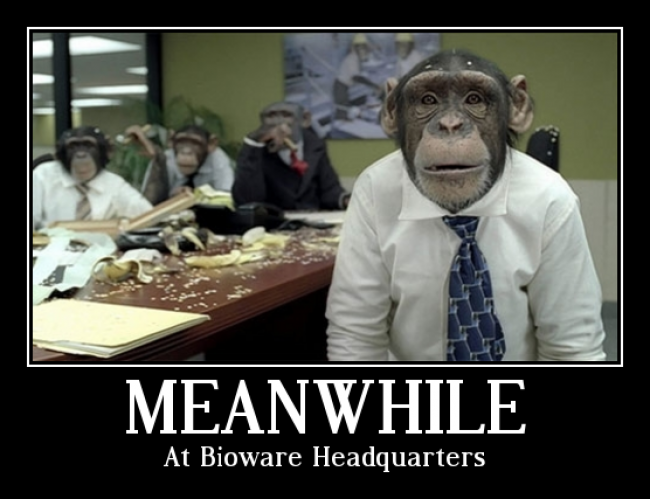 Mass Effect 3 was released on March 7, but like SOPA and Pixar’s Brave, it has already been long forgotten by “the Internet.” More specifically, the drama surrounding the game’s daft color-coded endings wore everyone out to the point of apathy. Even I stopped caring, and I usually love arguing just to hear the sound of my own keyboard!

But all of those old Shepard-flavored wounds are set to come bubbling back tomorrow, as BioWare releases the long-awaited Mass Effect 3 Extended Cut, directly intending to address the many concerns fans had with how the trilogy was ended. But does anyone even remember what those issues were (besides Hitler)?

Luckily, a quick Google search reveals 1) Kate Upton is ridiculously hot, and 2) photo evidence (mostly from Reddit) reminds us of BioWare’s many attrocities on the gaming public:

Also, here’s the real Rachel Dawes reacting to Batman’s admission that the Mass Effect 3 endings were his doing:

Check back tomorrow after we’ve played through the Extended Cut DLC, as we’ll be going through our checklist and seeing if/how these issues were addressed, or if it’s time to dust off the pitch forks and send more cupcakes.