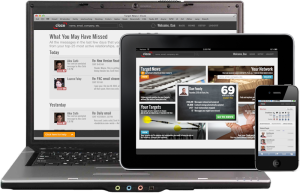 Cloze helps users manage their professional contacts by collecting information spread across various email accounts, social networks, and corporate tools into one, cohesive location. The product is targeted towards people whose careers are based on the strength of their connections, like those in sales, business development, marketing and PR.

“When I moved from the Bay Area to Boston, I had to essentially rebuild my professional network,” said CEO Dan Foody. “Doing this makes you realize how important your network is, but also how fragile it is. The important people in your network still need care and feeding. Cloze brings people’s most important relationships to the front of the line.”

In addition to creating an online rolodex, Cloze provides context for each contact by providing relevant information and a ‘relationship quality score’ so users can get the most out of their connections. Users import contacts from their various accounts, which are then analyzed and rated. The scores help separate proven relationships from passive ones, highlight priority connections, and provide networking suggestions.

While tools like Linkedin and Gmail’s Priority inbox facilitate contact management, the Cloze Score is intended to help users leverage their contacts to achieve maximum impact. For example, it not only tells you who can make an introduction, but who is the best person to make that introduction.

The funding — a seed round — was led by Greylock Partners, Kepha Partners, and NextView Ventures.

Cloze was founded in 2012 by Dan Foody and Alex Coté. It is based in Cambridge, Mass., and has around 10 employees.