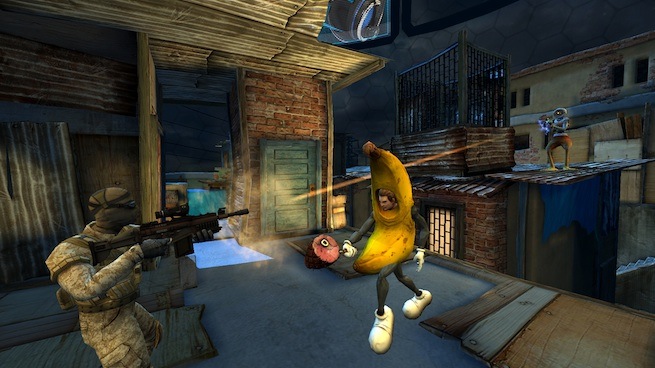 Most first-person shooters (FPS) like to show off how realistic their graphics are — how detailed they can render massive explosions or how much blood they can pack onscreen. Offensive Combat is merely concerned with how much it can make you laugh.

U4iA (pronounced “euphoria”) Games were quick to remind us of that during the recent unveiling of the game in San Francisco even before we had a chance to sit down and try out the upcoming PC-only, free-to-play title. A curious breadcrumb trail of bananas lined up the entrance of the building and continued inside the elevator, and upon reaching the third floor, we were greeted with piles of the yellow fruit stacked high all around the demo room. And we soon found out why after viewing only 10 seconds of the game’s first trailer: Of the many options you’ll have to accessorize your character, the banana suit was clearly a favorite.

While this sort of slapstick humor isn’t rare in games by any means, the team at U4iA is intent on keeping it fresh as time goes by. And a big part of keeping up that relevance is driven by the platform that the game is built on: your web browser.

By utilizing a customized version of the Unity Engine, a development tool that is particularly suited for creating browser-based 3D games, the developers can tweak, patch, and update Offensive Combat from the server side without interrupting the player’s experience. And that means that if the team sees anything in the pop culture world that they like, they can almost immediately incorporate it as a new item or animation in the game.

We’ve seen such things before in titles like OMGPOP’s Draw Something for smartphones and tablets, where words referencing current news and pop culture are added regularly, but very few games on the scale of Offensive Combat, especially in the FPS space, seem to take advantage of this. 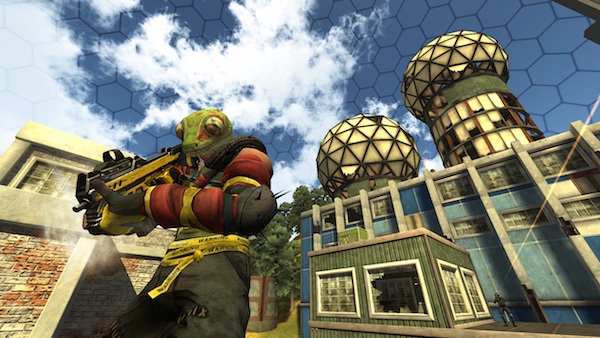 “While everybody does realistic and gritty,” said Chris Archer, chief creative officer and co-founder of U4iA Games, “and we’ve done realistic and gritty a lot, we thought people wanted something a little bit different. We not only did that, but we went further. We went all the way. We went full monty on it.”

But it was only after I got to pummel my fellow game journalists with the mighty Hammer (a pitchfork with a giant piece of ham on top) and affectionately performed victory dances (in-game taunts known as “pwns”) around their dead bodies that I started to get it. Soon, my customized character, a half-robot, half-Big Foot abomination, terrorized the playing field with his luscious coat of fur and penchant for destruction.

“My favorite weapon is the rubber chicken,” said Jason Cheu, vice president of business deployment. “It’s that humor element and your ability to show off that’s kind of funny…like no one wants to get killed by the rubber chicken. We’re finding that [players] with the better skills like to show off the more irreverent and funny things.” 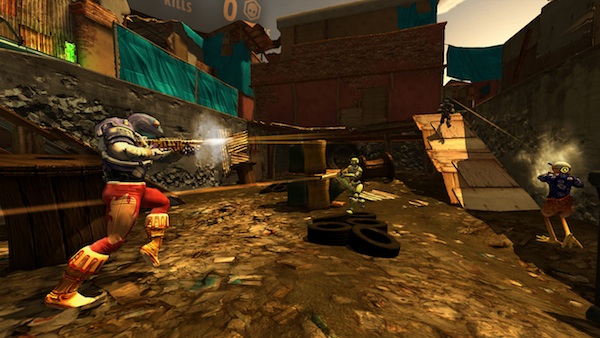 Offensive Combat is sort of like the video game equivalent of South Park, the raunchy cartoon created by Matt Stone and Trey Parker, and the way that Stone and Parker are able to weave timely events into the show’s plotline within a few weeks of them happening. That’s one of the many reasons why South Park continues to engage audiences every season — more than 15 years after its debut in 1997.

“Absolutely,” Archer told me when I asked if shows like South Park had any influence over the creation of the game. “[chief executive and co-founder of U4iA Dusty Welch] says South Park; I say Family Guy; we say The League. These are all inspirations for us. They’re kind of over the top and crass at times and definitely [focus] in on pop culture.”

Archer promises that the humor can get more or less “wild” as time goes on, depending on how consumers react to it. Either way, Offensive Combat will offer a decidedly different FPS experience when the open beta launches later this August.

Oh, and those “pwns” I was talking about? One of them, the Chicken Dance, was taken directly from another beloved television show, Arrested Development. As far as I’m concerned, that fact alone makes Offensive Combat a serious candidate for Game of the Year.