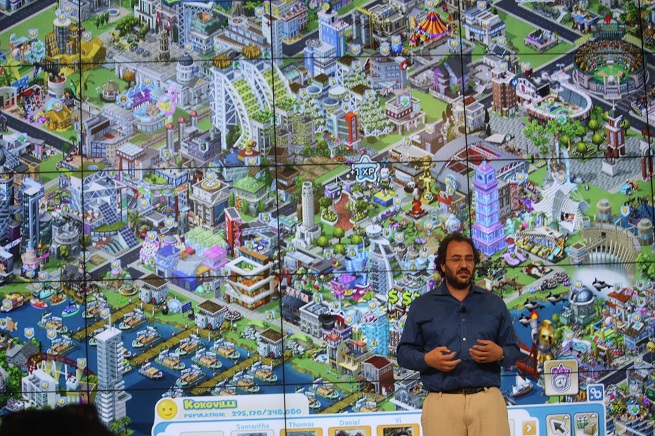 Zynga said today that it has developed a faster infrastructure for its social games and will make the technology available to third-party game developers through its open third-party platform.

The company made the announcement at its Zynga Unleashed press event. Zynga chief engineer Kostadis Roussos said at the event that the new “optimized game mechanics” technology helped it create the fast-action arcade-shooter game Bubble Safari, which allows players to shoot bubbles at fruit hanging from trees at a fast rate. Starting today, users will be able to play fast-action multiplayer sessions in the Bubble Safari game. That’s a feat that no other social game companies can match today, Zynga claimed.

It may sound simple, but Zynga believes it has a competitive advantage. Zynga was able to do this, Roussos said, by custom-tailoring its data center infrastructure, dubbed zCloud, for its own needs. It took about 80 percent of its social game servers off Amazon.com and began hosting them itself in its own “private cloud.” For every three servers Zynga needed on its public cloud, it only needs one server in its private cloud; that helped cut the cost of its infrastructure dramatically.

This is how Zynga can host 290 million monthly active users (those who log in during a month) and 65 million daily active users. It has more than 22 million daily active players on mobile, and it has players in 175 countries. Across Zynga games, 6 billion neighbor connections currently exist, and Zynga games have been played an astounding 1.8 trillion minutes. Zynga was able to launch its CastleVille game in the fall on Facebook and get 2.8 million players in a week.

Today, millions of players connect to Zynga games at the same time. Zynga releases 100 updates to its games every day, and it tests thousands of features in a given week to see if they are fun. The company’s players engage in 1 million activities every second.

“We can find out within minutes if millions of players enjoyed a change we made in a game,” Roussos said. “That helps us know what features are fun.”

Zynga will make the fast-action game mechanics available to third-party developers through something it calls Project Darwin, which is also known as the Zynga API (applications programming interface). Zynga’s technology allows it to reduce the amount of code that is hosted on both servers and on a user’s machine dramatically. This also cuts the number of servers Zynga must buy.

“It goes faster for game players, cuts costs, and cuts code in half,” Roussos said. “It’s like magic.”

In a group meeting with journalists afterward, Jim Veevaert, general manager at Zynga’s arcade division, said that the company is taking full advantage of the new features in the Flash 11 platform, which allows a game to take advantage of any graphics hardware in a computer, as opposed to just its central processing unit.