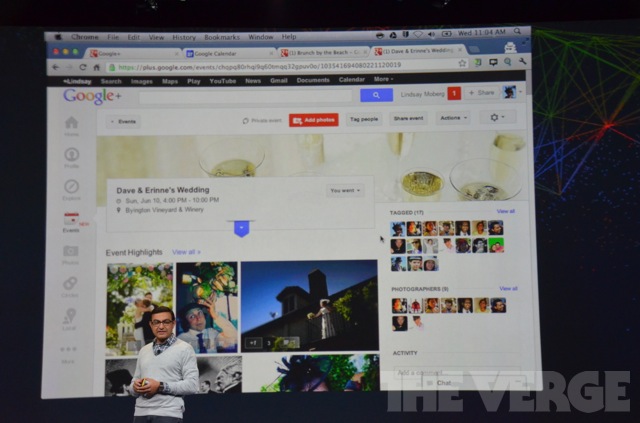 Google announced some major milestones as well as some fun new toys for its Google+ social network at the Google I/O developer conference today.

Google+ now has more than 250 million total accounts and more than 150 million monthly active users, Google’s Vic Gundotra announced at the event. More than 50 percent of Google+ users sign in daily, and they also typically spend more than an hour on the site every day.

Google also announced today that Google+ is finally making its way to tablets, starting with Android tablets today and coming soon to the iPad.

The primary Google+ announcement from the main stage today, however, was Google+ Events. Events offers a slick (if you’re used to Facebook Events) invitation feature, a cool (if not too actually useful) “party mode” slideshow featuring pics and videos from the event while it’s in progress, and a comprehensive page for post-event reminiscences.

One thing that wasn’t announced, however, was Google+ History, a feature we learned about from a Googler after today’s keynote had wrapped up. History will allow you to pull in your past updates, statuses, and checkins from other networks to better flesh out your Google+ profile.

Almost exactly one month ago, we saw the launch of Google+ Local, which pulls local business information, ratings, and reviews into the Google search/Google+/Google Places experience.

Around the same time, Google+ for Android got an overhaul that included beautiful new UI elements and the ability to start a video chat Hangout on the go.

And it hasn’t escaped the Mountain View-based mothership that photographers are loving Google+, as well. In fact, they’re one of a few demographics that are truly taking the network by storm. We’ve previously speculated that the search giant is making a bid to overtake Flickr as a photo-sharing destination.

More than its functions as a photo-sharing service or a local recommendations engine, however, Google+ is, as the company sees it, an overarching method that ties together Google’s entire range of consumer products. As we have discussed in the past with Google exec Bradley Horowitz, Google+ was intended to become a unifying login (and a unifying social strategy) for everything from YouTube to Gmail to Reader to Blogger and beyond.

We’ve seen bits and pieces of this unification. For example, the company’s addition of social results to web search was one of its biggest changes in a decade.

What we’re still waiting to see, however, is how Google+ will impact the online world and how engaging it can become, even as its user count continues to climb.