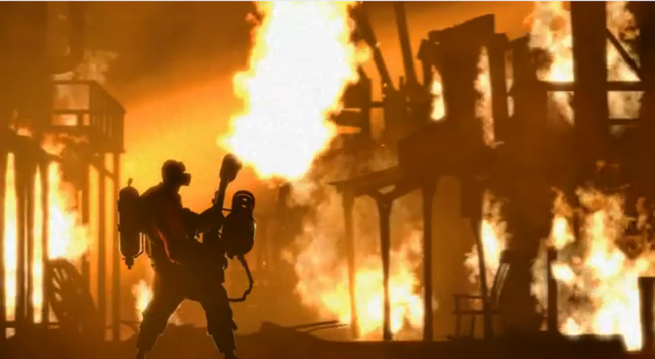 A countdown timer ticking away the seconds to the last of a video series introducing the various classes of Valve’s multiplayer first-person shooter Team Fortress 2 just hit zero. Gamers, Meet the Pyro.

“I fear no man, but that…thing scares me,” whispers the Heavy.

“One shudders to imagine what inhuman thoughts lie behind that mask,” says the Spy.

Evidently, any thoughts forming behind that enigmatic mask involve a complete disconnect from reality, a firebug’s insanity, and…well, you’ll see for yourself in the video below.

The Pyro is one of nine classes players choose from in TF2, a stylized and highly popular multiplayer shooter released by Valve in 2007. Zipped up in a flame-retardant suit and wielding a homebrewed flamethrower, the Pyro sows chaos in close quarters and around blind corners. Fans speculated since the game’s launch on the Pyro’s mysterious origins, suggesting such figures as a monkey, a female (the rest of the game’s classes are all male), and even Valve cofounder Gabe Newell.