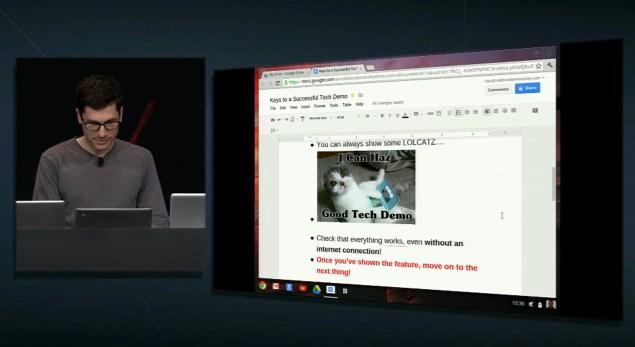 Google announced today that its Google Docs online editor is now available offline (every business person on an airplane just got really excited).

The company revealed the news at its Google I/O conference in San Francisco, Calif.

Google Docs allows teams to collaboratively edit documents and save their versions on top of other people’s contributions without overriding their content. Docs is often used by small businesses and individuals, but has been criticized widely for not being accessible without an Internet connection. Now, people will be able to open documents and add changes while offline, and sync those changes as soon as they enter a Web-friendly zone.

Google project manger Clay Bavor showed off the capability on stage. He opened the editor online, disconnected his laptop from the Internet and continued to edit. He saved the project locally, and as soon as he reconnected to that Google doc, all his updates were automatically pulled from the memory and saved online.

Offline editing puts Google Docs in a position to take on note-taking applications such as Evernote. One major complaint about Evernote is the inability to share notes with others, which Google Docs obviously already enables.

Offline editing is also available for Presentations in Google Docs.