Research in Motion reported its worst quarter in ages after the market closed on Thursday, and showed that it deserved every bit of scorn over the delay of its vital BlackBerry 10 OS until the first quarter of 2013.

RIM reported a disastrous first quarter loss of 37 cents a share based on revenues of $2.8 billion, a 43 percent decline from the year-ago quarter. The company’s revenue breakdown was 59% for hardware, 36% for service and 5% for software and other revenue. During this quarter, RIM said it shipped just 7.8 million BlackBerrys and a paltry 260,000 BlackBerry PlayBook tablets.

Thorsten Heins, the still new-ish CEO of RIM, said he was not satisfied with the results. (And he damn well shouldn’t be.)

“Our first quarter results reflect the market challenges I have outlined since my appointment as CEO at the end of January,” Heins said in a statement. “I am not satisfied with these results and continue to work aggressively with all areas of the organization and the Board to implement meaningful changes to address the challenges, including a thoughtful realignment of resources and honing focus within the Company on areas that have the greatest opportunities.”

On top of tremendously awful financial numbers, the company delayed the introduction of devices running its next-gen BlackBerry 10 operating system to the first quarter of 2013.

“Our top priority going forward is the successful launch of our first BlackBerry 10 device, which we now anticipate will occur in the first quarter of calendar 2013,” Heins said. “In parallel with the roll out of BlackBerry 10, we are aggressively working with our advisors on our strategic review and are actively evaluating ways to better leverage our assets and build on our strengths.”

To deal with its horrible financials, the company plans to cut approximately 5,000 jobs by the end of fiscal 2013.

The market has responded by flushing RIM’s stock down the toilet. In after-hours trading, RIM’s share price is off about 18 percent to $7.50 a share.

Here’s RIM’s stock performance over the past 10 years: 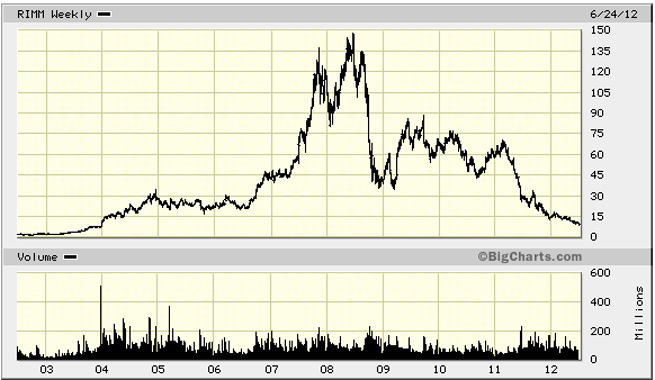