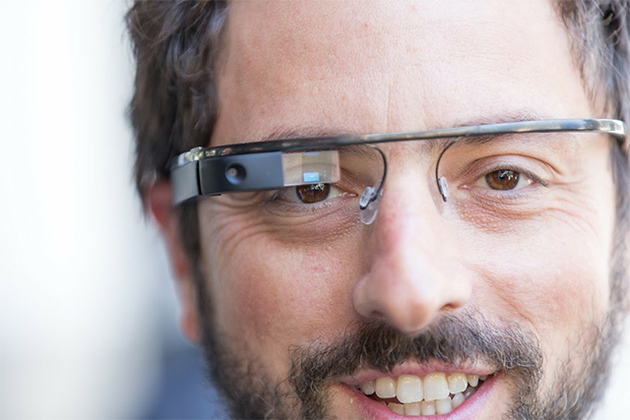 Larry Page has lost his voice — literally, and perhaps figuratively too. At Google’s I/O conference, the company’s yearly event for major product reveals, it was the Sergey Brin show.

Brin, the Google co-founder who no longer runs the company but directs its special products, has been parading around the Moscone center in too-cool-for-you Google Glass wear for two days now. (Meanwhile, Page, the company’s chief executive, was nowhere in evidence, which the company officially attributed to having lost his voice.) Brin’s over-the-top, outrageous demonstration of Glass Wednesday included Google Glass-wearing skydivers parachuting onto the roof of the Moscone Center, while the whole thing was displayed in real time on the Moscone video screens. It may have been one of the most stunning tech demos ever, but it also upstaged Google’s other announcements, which included a new Android operating system called Jelly Bean, Google’s first tablet in the Nexus 7, the Nexus Q media player, and improvements to the often ridiculed Google+ social network.

In fact, when Brin walked on to the stage wearing a pair of the glasses, he interrupted Google senior vice president of engineering Vic Gundotra’s talk on the launch of Google+ Events. At that moment, it was if no one in the room or nothing else announced prior mattered in the slightest. The crowd was arrested by the quirky genius, captivated by the airship skydive, and awed by the entire spectacle.

The hoots, hollers, and deafening applause said it all: this is Sergey’s world and we’re all just living in it.

“Wait, they announced a tablet?” Jason Buscema, a tech enthusiast following the drama via live stream, tweeted at me shortly after the demonstration. “That PR stunt was nuts.”

Buscema’s tweet echoed my own thoughts on the matter. I too was mesmerized by the Glass-to-Hangout sky-high demo, but I couldn’t shake the feeling that Brin, in wanting the world to appreciate his pet project, let Glass outshine the Nexus 7, a fabulous device with the potential to unseat the Kindle Fire as the second-most popular tablet on the market.

Worse still, when Gundotra returned to his interrupted Google+ talk to show us a video of the new Events feature, the immediate juxtaposition of the two products made the social network seem small, devoid of originality, and lost in a sea of also-rans. Against the untouchable luster of Glass, Google+ just couldn’t shine.

But maybe there’s good reason for all fanfare around Brin and Glass. It’s been suggested that Glass is the future of Google. The argument is credible. Should Glass live up to its potential, the device has the potential to change how we interface with the world around us, and how we think about mobile devices. Glass could also usher in the next generation of the social network.

“It’s pretty clear that Glass has been and continues to be one of Sergey’s pet projects,” Altimeter Group mobile analyst Chris Silva told me. “I think that is the reason it got as much airtime as it did.”

“The Glass demo was the best all-around demo for technology I have seen in my 22 years in high tech,” Moor Insights & Strategy president and principal analyst Patrick Moorhead told me. Moorhead also likened Brin to superhero Tony Stark, otherwise known as Iron Man.

“Google’s audacity to broadcast live from Glass, jumping from a blimp, landing on a building, rappelling down the building and BMXing into the building will be talked about for a long time. It absolutely upstaged the tablet news,” Moorhead said.

The message that Brin sent, intentional or not, said Silva, is that one can drone on and on about Google+ and how great the features are, but if nobody’s using it, it doesn’t matter. The bumping of G+ for Glass, he said, was like Brin saying, “here’s something that does matter.”

Glass, Silva added, is the most exciting thing that Google has announced. “The natural extension of Google Glass is Google+. It’s a way to connect Glass to all the other people in your life, and all the other places you want to keep and store information,” he said.

“When that type of omnipresent wearable computing becomes commonplace, you’re going to be looking to whomever provides that experience to give you a place to plug it into,” Silva added. “Glass, as a mass market product at a price point most people can afford, and tied to a social network of really beautiful apps for sharing — that’s what going to be a game-changer.”

Brin may have pushed his luck a bit by repeating the Glass demo on day 2, as seemed to be the consensus here, but the superfluous display was a reminder to us all that Brin is running the show — and dictating our future in the process.