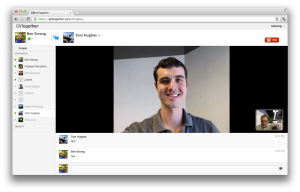 VLine, a cloud video conferencing platform for developers, showcased its platform for the first time yesterday at the Google developer conference. It also revealed raising $1.5 million in seed funding from Kleiner Perkins and Harrison Metal.

Founders Strong, Adam Fineberg, and Prakash Ramakrishna began VLine at the end of 2010 after Google launched their Web RTC project, which provided an open framework for enabling RTC in the browser. Using the open sourced code, the team began building a tool that bundles together all the technology required to build video conferencing capacity into an inexpensive and easy-to-use package.

While Google currently has an API for hangouts, it requires users to log in through Google. Companies that prefer to control their users’ experiences can use VLine to develop their own video platform. This is increasingly important as the degree of online communication escalates. With RTC capabilities becoming a regular feature of web and mobile apps, the challenge of easily enabling video conferencing in the browser is a pain point VLine strives to address.

“Every interesting device now, whether it is a smart phone, a tablet, or a laptop, all have cameras built in that could be used for video conferencing,” Strong said. “Combine this with the emergence of hundreds of social apps where people are interacting in real time, and you see a natural evolution towards the richest possible communication experience, which is video.”

In addition, the team is building an open-sourced platform called GitTogether that will add a video component to developer social network GitHub. Using this API, developers can more effectively communicate with each other and manage projects.

VLine currently has 4 employees and is based in Palo Alto. During the beta period over the next several months, the product will be free of charge. After that, there will be an ongoing service fee. VLine has worked in close collaboration with the Google Chrome team and plans to launch a Javascript browser SDK in July, followed by an iOS SDK later in the summer.