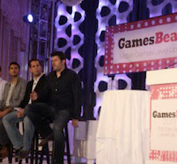 Drumroll, please…. Here’s our finalists for our best game startup battle, dubbed the Who’s Got Game? competition. The finalists go up on stage for five minutes at our GamesBeat 2012 conference and make their pitches in front of a panel of all-star judges and over 500 media, entrepreneurs, investors, and industry executives.

In alphabetical order, the finalists are:

Akamon: This is a social gaming company that makes local, traditional, and casino-type games. It has 38 games, and its strategy is based on “shared liquidity” of its fun, easy-to-play synchronous games. Akamon’s community can enjoy a social experience regardless of their point on entry from portals, white label sites, social networks, and mobile devices. It was funded less than a year ago and has 40 employees. Its focus is on Latin markets, and it boasts high revenues per user.

Izelis: Founded by former Facebook and Zynga employees who have a passion for traditional games, Izelis builds games that capture the more intimate fun of tabletop games and carries over those experiences to browsers and mobile devices.

Loki Studios: Loki Studios is a seed-funded mobile game studio focused on combining engaging game design with the features distinct to the platforms of the next generation. A group of gamers from Stanford founded it.

Playmous: This is boutique mobile games publisher. From design to marketing, Playmous walks with developers without stepping on their toes. It focuses on long-term partnerships, not transactional relationships. It builds franchises, not mere one-hit-wonders. Playmous’s first game sold half-a-million copies in two months.

Replay Games: Led by industry veterans Paul Trowe and Al Lowe, Replay is creating a remake of Lowe’s original Leisure Suit Larry game from the 1980s. The company raised more than $600,000 last month from a successful Kickstarter campaign, showing that there is a lot of pent-up fan demand for Larry’s weirdness and sexual humor. Replay Games debuted in 2008, founded by game industry veterans with over 125 years of collective game industry experience. Its goal is to reinvigorate many of the greatest intellectual properties ever created, maintain their integrity and utilize the original talent, and introduce them to a new generation of gamers.

Use It Better: This company enables games developers to record and analyze thousands of players behaviors to improve Player Experience or eliminate fraud. Use It Better’s specialized set of features makes analytics a team play — you can examine gameplay replays, interactive heatmaps, and behavioral patterns. It’s currently in closed beta with industry leaders including Kabam and Peak Games.

Here are the judges:

Update: Our moderator will be Gus Tai, general partner at Trinity Ventures. He joined Trinity Ventures in 1996 and specializes in early-stage companies. He has been on the Forbes Midas list and focuses on consumer services and consumer enabling technologies. His investments include Badgeville, Maxpoint Interactive, mSpot, PlayFirst, Trion Worlds, Truaxis, WetPaint and Zulily.

Ann Burkett is the chief executive of the Game Dojos Accelerator and chair of the Silicon Valley Independent Game Developers Association (IDGA). Burkett is a game developer who joined the game industry with Macromedia Shockwave.com and has worked on a number of titles, including the CrowdStar hit game It Girl. She founded the HTML5 Developers Conference, the Bay Area Game and App Developers Groups, and Games.js.

Gordon Bellamy is the executive director of the IDGA. Bellamy runs the international body that represents game developers. He was previously a senior producer at yU+co, a senior sales executive at Image Metrics, and the business development director at Double Fusion. He also worked at MTV Networks, AIAS, THQ, and Electronic Arts.

Eric Goldberg is the managing director at Crossover Technologies. Goldberg is a 30-year veteran of the game industry, serving in capacities ranging from game designer to executive. Since 2002, he has been a board member of, advisor to, or consultant for over 30 consumer-facing technology companies, from seed-stage to public, in the game, virtual world, consumer Internet, wireless data, and monetization sectors; and to three U.S. venture capital firms. Previously, he was cofounder and president of Unplugged Games and of Crossover Technologies, the consumer online firm; and president of West End Games, which used to make role-playing and board games company. Goldberg helped judge our contest in the past.

Michael Chang is the senior director of corporate development for Electronic Arts. Chang joined the corporate development team of EA in July 2010 and is responsible for executing on acquisitions and investments for EA. Prior to this, he worked at various venture capital and private equity firms, including Bertram Capital, Apax Partners, Technology Crossover Ventures, and Lightspeed Venture Partners. He started his career as a technology M&A banker at Jefferies Broadview. Chang was one of our judges last year.

The judges screened dozens of applications to come up with the six finalists, and they’ll be making their final selections based on the following criteria:

This year’s winner will be announced on stage at GamesBeat 2012 and receive introductions to game investors in our network and be featured in a blog post.

The Game Dojos Accelerator is offering the winner a complimentary acceptance into their next class session round. Acceptance will be completely free and incur no equity stake in the company or any other charges. Nokia Developer is also giving all finalists a Nokia Lumia 800 phone.

*Based on Economy PlanAAhead ® award. Complete Business ExtrAA® program details and terms and conditions can be found at www.businessextraa.com.