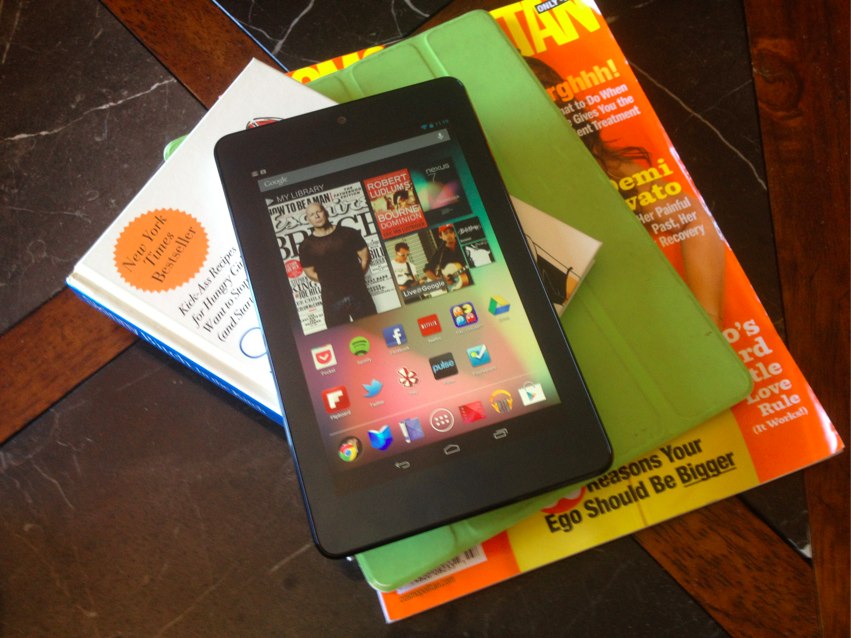 All tablets are not created equal. A fact not lost on this reporter, who, at the age of three, learned to love Apple by using the very first Macintosh. Reared on the Apple doctrine, I now demand excellence in hardware, sleekness in design, and that indescribable feeling of pure joy when touching a device.

For the first time in my life, a company other than Apple has given me all that and more.

Unveiled Wednesday during the keynote address at Google’s I/O developer conference, the $199/$249 Nexus 7 outshines the existing class of Android-powered tablets, the Kindle Fire included, for one simple reason: This is the only non-Apple device I would ever buy.

An iPad-owner and lover since day one, I’ve come to view my tablet, which mind you I never actually refer to as a tablet because I’ve always believed the iPad to be superior to any other, as my most pleasurable device. My iPhone and my MacBook Air are utilitarian. I love them dearly, but I think of those devices as necessities, and I primarily associate them with work. The iPad, however, is my play device. It’s my feel-good, sit-back-and-relax toy.

The Nexus 7, which falls into the same category of device for me, has in less than 48 hours carved out a special place for itself in my heart. I find myself reaching for the 7, as I lovingly call it, over the iPad because, well, it’s just so darn cute. I love the size, the feel of the 7 in my hands, the leather-like quality of the back panel, and the overall style of the device.

Holding the Nexus 7 feels right, browsing is fantastic (thank you, Chrome tab sync) and fun, and because it’s running the new Jelly Bean software, the Nexus feels smart, intuitive, capable, and pretty darn slick. Thanks to Project Butter, the 7 feels nearly as smooth as the iPad. No major kinks, blips, or bumps to speak of — at least so far.

I also quite like the arrangement of media on the device. As an iOS user, I was a little disoriented at first, but I quickly became acclimated to the idea of apps on one page, books and magazines on another, movies in their own place, and music on its own screen. This configuration makes it all the more easy to appreciate the content and media recommendations Google serves up in each category, which really do seem to get better with time.

But beyond pleasure, what’s truly remarkable is just how practical the 7 is. Here’s why: When it comes to my web activities, I’ve gone Google. I’m yoked to Gmail, dependent on Google Calendar, tied to Google Docs (and now Drive), leashed to Chrome, and the list goes in. I can’t tell you how convenient it is to have Google as a seamless, interconnected part of the experience. Sure, this isn’t something that’s unique to the Nexus 7, but it’s lovely nonetheless.

Don’t just take it from me though. I talked to plenty of folks at the Google I/O conference who were impressed by this little sucker.

“I really like it. I used the hotel Wi-Fi and started watching Transformers. It looked really good,” developer and This Week in Google host Gina Trapani told me yesterday. “It’s small and light. It’s definitely a better Kindle Fire.”

Trapani, much more of a-know-it-all than I am when it comes to the Android software side of things, was also impressed with the subtleties that Project Butter and Jelly Bean have brought to the Nexus 7 experience. “My main complaint with the Android experience is that it’s slow and choppy, and not responsive,” she said.

But the Nexus 7, running Jelly Bean, provided a much better experience for Trapani. “It’s very smooth, and very fast,” she said. “I can see giving this to my sister-in-law. She’s in the market for a tablet … I’m going to tell her to get this.”

VentureBeat’s gadget guru Devindra Hardawar is also pretty impressed by the Nexus 7, as are gadget bloggers the web round, some of whom went deep into review mode.

Yes, it’s disheartening and a bit defeating that some of my favorite applications aren’t available for the Nexus 7. HBO Go, where are you? I do have a strong feeling, however, that by releasing a stellar device, Google has just given top iOS developers the nudge they’ve needed to build for Android too.

Let’s get to the meat of the matter. Should you buy the Nexus 7? If you’re in the market for an extremely portable tablet and don’t mind the smaller screen size, than absolutely. This isn’t some second-rate device that you should feel ashamed about toting around. No, hold your head high.

Bonus: What you save in price, you can spend on shoes. Okay, that’s just me. But seriously, I’d purchase the Nexus 7 as my primary tablet in a heartbeat. I’d also recommend it to my friends and family members. In fact, this is the very first non-Apple device that I’ve ever said that about — and that’s saying something.