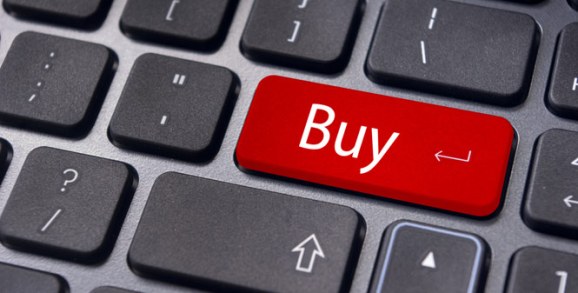 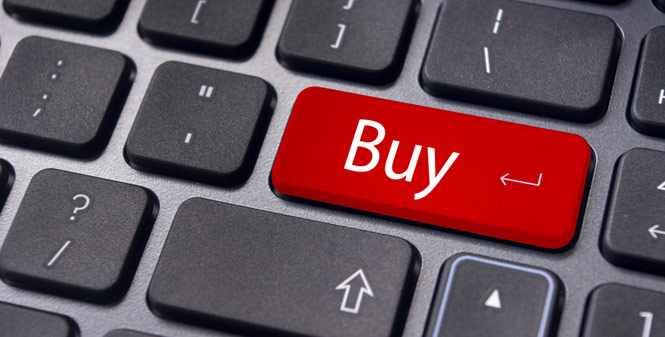 What can 100 million online shopping experiences teach you about e-commerce in 2012? Apparently quite a bit.

Monetate may not be a household name, but the company has its fingers in 20 percent of U.S. e-commerce traffic. With customers such as Best Buy, Comcast, Brooks Brothers, and Anthropologie, Monetate has its pulse on what works and what doesn’t work when selling online.

Today the web testing, merchandising, and targeting company is releasing the results of its latest market survey, Ecommerce Quarterly for the first quarter of 2012. VentureBeat spoke to Blair Lyon, vice president of marketing, and Rob Yoegel, content marketing director.

“Because Monetate influences more than 20% of  U.S. e-commerce traffic, we have the opportunity to sample that data in an anonymous and random way,” said Lyon. “So we can see key trends in the marketplace.”

The first trend won’t be a big shock to VentureBeat readers: a major surge in tablet traffic. The survey also unearthed some interesting data around conversion of surfers into customers. 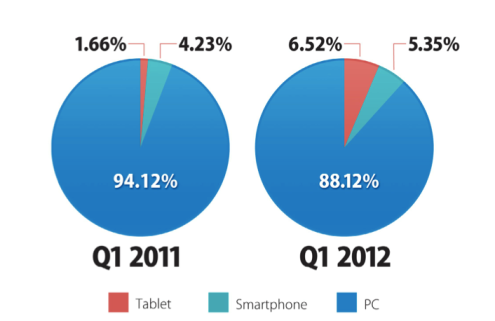 Above: E-commerce site traffic: the amazing difference one quarter can make

“We’ve seen this huge surge around tablets,” Lyon said. “But not only is the traffic rate going up, the conversion rate is going up too … and sometimes exceeds desktop conversion rates.

Mobile traffic from smartphones is up too, but the conversion rate is still relatively low. The important point for Lyon is that “tablet is not mobile and mobile is not tablet.” In fact, the two are very different: different use cases, different times, and different conversion rates. 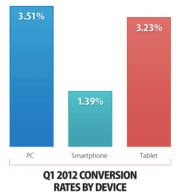 That’s something for retailers to think about, said Yoegel:

“Retailers in general will treat people on tablet and smartphones as the same user, and our data is showing that they shouldn’t.”

Tablet users also view almost as many pages on a site as desktop users, about 11-12, while smartphone visitors view only about seven pages per session.

The Monetate study also investigated the impact of social commerce, comparing traffic from social networking sites to traffic from search engines such as Google.

Traffic from social networks increased between the last quarter of 2011 and the first quarter of 2012 and was up 77 percent over a year’s period. And while Facebook drives 60 percent of social commerce visits, Pinterest came from nowhere to over a quarter of all visits. 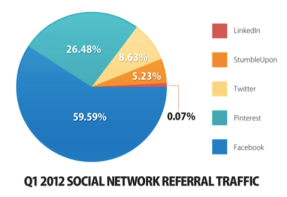 Twitter and StumbleUpon took up most of the remaining traffic, with LinkedIn driving under one percent.

Search traffic also grew, but not as fast: up almost 25 percent.

But search converts much better

First, about half of it bounces as visitors leave without viewing any other pages on the shopping site. Only about three percent add a product to a shopping cart, and less than half of a percent actually buy something.

However, search traffic, particularly from Google, only bounces a quarter of the time; it converts surfers into customers at a 2.44 percent rate.

Lyon attributes this to differing objectives:

“I think the social user is looking at it more from an interest point of view versus a buying point of view,” he told VentureBeat. “Whereas search is targeted.”

One other question I asked Monetate: In the wake of the recent news that Orbitz was steering customers with Mac computers to pricier hotels than PC surfers … are we going to see this behavior in every retailer? In other words, will online shopping start to look like flights, where it sometimes seems that no two people ever pay the same price?

“Everyone is talking about it,” admitted Lyon. “Everyone is trying to figure it out. But it’s all about testing different ways to find out what is the right threshold.”

More highlights from the Monetate report: