Fans have been waiting for signs of a new Half-Life, a popular shooter series dealing with an alien invasion and occupation of Earth. Developer and publisher Valve released the last game in the franchise, Half-Life 2: Episode 2, almost five years ago. Since then, we’ve heard little about a follow-up. But a leaked gallery of images shows that Valve hasn’t completely forgotten about the series. 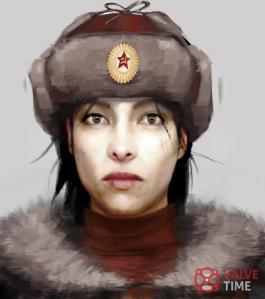 The leak comes from Valve Time, a fan site that claims that Valve created the concept art in 2008 for Half-Life 2: Episode 3. The pictures mostly feature supporting character Alyx Vance in an assortment of cold-weather apparel (such as this image on the right). That makes sense, since the ending of Episode 2 hints that series hero Gordon Freeman and Alyx are heading for the Borealis, an icebreaker and research ship.

Two moderators from Valve’s forums claim that the pictures are legitimate in this thread, as originally reported by Product Reviews. One moderator, Smash, posted, “This is official art, and I’m shocked that this day has come!” When asked by a community member how he knew, Smash responded, “Because I know who the source is, but I’m not going to give it away just yet for exclusivity reasons.”

We have reached out to Valve for comment. You can see the entire gallery here.