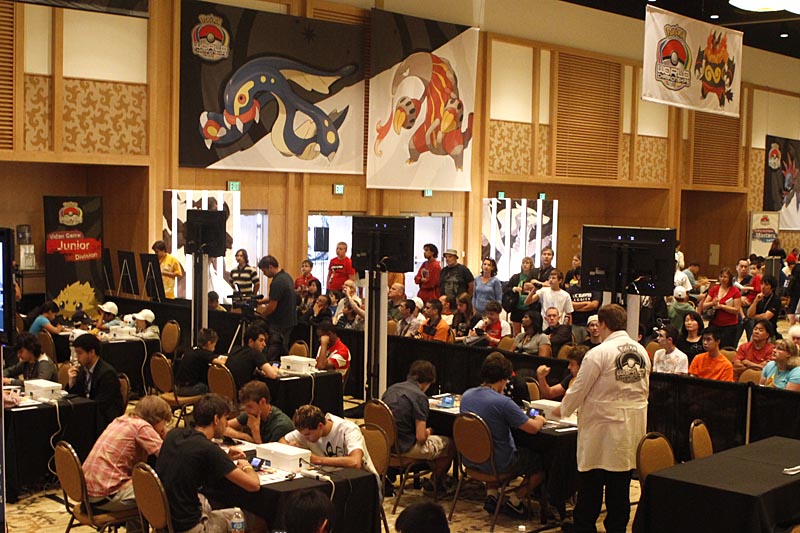 Linda Arnold is like many other moms. She has three kids — 14-year-old twins David and Ryan, and a daughter, Grace, who is 11. That’s not all. This family is a video gaming family, playing and winning Pokémon video game tournaments like the one happening this weekend since 2008.

Grace took an early lead in the family’s accomplishments, qualifying for the World Championship Pokémon games in 2008, 2009, 2010, and again last year. She placed first in the 2010 regionals in Atlanta and third place the last two years.

This championship team isn’t just about the kids. Linda herself qualified for the Pokémon World Championship in 2010, and her husband, Glenn, qualified for it in 2009 and 2010. This is so groundbreaking in Pokémon tournament competition that they earned a spot in the 2012 Guinness Book Of World Records Gamer’s Edition.

The family has a long history of video gaming. “The kids have always enjoyed playing all the Pokémon games,” Arnold says. “Pokémon Leaf/Green for GameBoy was our first, and Glenn would play along to help the kids when they were stuck.”

The video game competition started for the family in 2008, when Grace placed in the top eight players in a regional competition in New York. The family drove from their home in Chicago for the event. When Grace won a trip to Orlando to compete in the Pokémon World Championship, they were hooked.

“We have found the tournament games to be quite exciting,” Linda says. “Besides playing their favorite video game, the kids have had a chance to meet people from around the world. We have traveled to tournaments in New York, Florida, San Diego, Washington, Hawaii, and Atlanta.”

According to Linda, the competitions remain friendly, and engaging in them together has really helped her family bond. “Besides sharing success, we also help each other cope with defeat,” she says. “We have so much fun traveling to competitions and discussing Pokémon strategies over dinner!”

She points out that the experience has helped her kids in school, resulting in higher test scores in reading and math. “Competitive Pokémon players do a lot of mental math during a match to figure out damage,” she says. “It is really impressive to watch the players!”

Gaming may be an important part of the bonds that hold the Arnold family together, but the family has set some clear rules on when and when not to game. Pokémon goes dark during the week, when the kids are in school. And the children don’t fight this; they’re involved with enough afterschool activities to fill their time. Linda also is proud that her children understand how to set priorities, something that she attributes to the intense focus, development of strategy, and sportsmanship they’ve learned from competition.

Pokémon Tournament players progress from regional and then national competitions to finally battle in the world tournament. This year, the National championship tournament takes place in Indiana from Friday to Sunday, with the World Championship happening in August. The Pokémon Company held the first world championship in 2003.