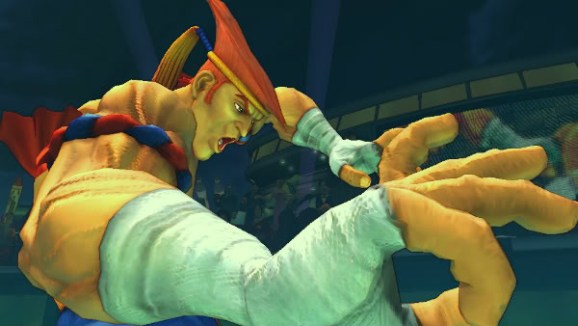 If you’re a fighting-game player in Las Vegas this weekend, you’d better watch out: An incredible cast of virtual warriors has gathered for Evolution 2012 – the largest tournament of its kind in the world – and you’ll need a keen mind and steady nerves to defeat this competition. Known as EVO, this event has grown from having a few hundred players to over 3,500 entrants with multiple online streams, panels, a section promoting indie games, and its own scholarship.

This year’s EVO features six games as major tournaments that include ever-popular Capcom franchises Street Fighter IV and Marvel vs. Capcom 3 along with the return of Soul Calibur and Mortal Kombat. Meanwhile, The King of Fighters 13 marks the veteran series’s first headlining appearance while newcomer Street Fighter X Tekken tries to prove its worth amid a cloud of negative publicity. All tournaments are in a double-elimination format, which means that if a player loses their match, they go into a second bracket before they are gone for good. The Top 8 finals of all of these tournaments take place Sunday. To watch the live stream and review the schedule of events, check out EVO’s Twitch.tv page.

Background: Capcom’s premier brawler headlines Evolution 2012 for the fourth year in a row. While other games have come and created their own fanbases, Street Fighter IV still has the most entrants. For a long time it was the fighting game everyone played, and most players got into competitive play through this slugfest.

Gameplay: Many games are faster and flashier than Street Figher IV, but there’s something to the classic fireball wars, space control, and mind games that make this title stand out. Previously, Capcom intentionally made Arcade Edition unbalanced so that players would have “villains” like Yun to root against. Since then, the developers tweaked the balance with the Version 2012 patch. Now almost every character is viable, and that means knowing each matchup is very important.

Why you should watch: Other games may have more spectator value, but that changes when the best compete here. Top players from around the globe congregate at this event without fail, and even a “safe” bet, like Japanese legend Daigo Umehara, can run into trouble on the way to the Grand Finals on Sunday.

The King of Fighters XIII

Background: Aside from Capcom vs. SNK 2, EVO has not had a major tournament involving the long-running King of Fighters franchise. After the glorified demo that was The King of Fighters XII and a spotty arcade release, the console version of KOF13 earned praise from hardcore fans. The completely sprite-based graphics stand out, and publisher Atlus’s decision to give all entrants a free T-shirt has significantly boosted the number of competitors.

Gameplay: KOF has always had small tweaks to the combat to make it play differently from Street Fighter, including a 3-on-3 elimination format and the various types of hops that make jumps less risky and the fighting more aggressive. A new addition is the Drive Cancel, a technique that extends combos by chaining one special move into another. Hyperdrive Mode allows you to do unlimited Drive Cancels for a limited time, and using it to destroy an opponent in one combo is an important tactic.

Why you should watch: The King of Fighters has stricter timing to input combos than other games, but this makes expert play even more exciting. SNK games also have huge followings in Mexico and China, and with each country sending their best, the finals should look different from the Capcom titles.

Background: Developer Namco Bandai hit the reboot button on this 3D swordfighting series after Soulcalibur IV, which, while successful, suffered from a slow pace and balance issues. The development team put their efforts into reemphasizing the faster combat of earlier Soul Caliburs and adding a new Critical Edge meter.

Gameplay: Compared to contemporaries like Tekken and Virtua Fighter, Soul Calibur has always let players move around easily thanks to the 8-Way-Run system. While the franchise has a reputation for being friendly to button mashing, that “strategy” goes out the window in high-level play, where players know the properties of hundreds of attacks. The Critical Edge meter gives players new super attacks, but most of the time they’re going to spend it on weaker Brave Edge moves and Guard Impact parries.

Why you should watch: With Tekken Tag Tournament 2 and other new games on the horizon, SCV may have to prove it deserves to be on the list next year. And just as KOF13 attracts talent from places other than the United States and Japan, SCV has a strong international presence from Europe and France in particular.

Background: Capcom sacrificed a lot of good will by releasing this update within the same year as the original Marvel vs. Capcom 3. Still, Ultimate improves the 3-on-3 tag-team battles by tweaking meter building, the X-Factor power boost, and dominant warriors like Phoenix. It’s not perfect – all but two of the Top 8 teams at last month’s CEO 2012 had newcomer Virgil in them – but more strategies and characters are relevant than before.

Gameplay: UMVC3 is still a game where you can get killed off by near-inescapable mixups and X-Factor comebacks. Keepaway monsters like Morrigan, however, can harass opponents with waves of projectiles, which has shifted competitive play away from relentless offense. That is, until players discovered a flood of infinite combos based on the air-tag system two weeks before EVO. It’s doubtful that we’ll see widespread use of this new tactic, but unless the developers create a patch, it will change how people play the game.

Why you should watch: Even those who hate playing MVC3 can enjoy watching the crazy combos and inflamed emotions that come with playing a game where everything is a gamble. Also, in a large tournament like this, we usually get to see a random player turn three underused heroes into an unstoppable force and make us feel lame and uncreative.

Background: Fighting-game purists once sneered at Mortal Kombat as a superficial gorefest that usually fell apart when people tried to take it seriously. This 2011 reboot, however, benefits from a strong engine and several free balance updates while still satisfying casual fans looking for blood. The community at Test Your Might kept the game relevant after its first EVO appearance, and MK is now a fixture at Major League Gaming. It also has the second-largest prize pot of any of the tournaments and will have a special United States vs. Europe exhibition today.

Playstyle: Mortal Kombat takes a lot of departures from Japanese fighting games. Projectiles pass through each other instead of clashing, while all attacks cause damage even if blocked. People have also praised the way MK handles meter management. Since you can do a Combo Breaker with two-thirds of the bar, you have to spend it wisely or leave yourself open to a brutal beatdown.

Why you should watch: Mortal Kombat’s unique mechanics and painful-looking attacks are a change of pace from smoother titles that gloss over turning people’s faces into pulp. The series’s signature Fatalities aren’t prevalent in competitive play, but the more humiliating and difficult-to-earn Babalities have shown up from time to time.

Background: Capcom intended Street Fighter X Tekken to continue the momentum of its previous hits by bringing two storied franchises together for accessible tag-team battles. Instead, players have mocked SFXT due to constant timeouts, an aggravating Gem System that’s banned at EVO, unpopular downloadable-content practices, and embarrassing screwups. How many other fighting games have released a patch that created a system-crashing glitch when two projectiles hit each other?

Gameplay: SFXT gets a bad reputation because of drawn-out matches and how good jabs are: Certain light punches have great “frame advantage” that make them hard to counter and easy to convert into combos. Evolution is only streaming the finals for this game because of the consensus that the game is boring to watch, but that doesn’t necessarily make it boring to play. SFXT has interesting team strategy and meter management, and some people still enjoy it despite how how trendy it is to hate it.

Why you should watch: SFXT is unique in that the organizers decided to use the 2 vs. 2 mode, where each player controls one character. That makes cooperating with your partner as important as what happens onscreen, and this may be the only time this game is at EVO, depending on how well later roster additions and balance changes fare.

To celebrate the 25th anniversary of Street Fighter, EVO is hosting an exclusive tournament for one of the most treasured games in the franchise. In the past few months, Super Turbo experts have qualified or received personal invites to compete in this Saturday night showdown. Who will triumph in this grand-master challenge?

While EVO has only six main tournaments, dedicated fans host side events for every fighting game under the sun. In the case of Virtua Fighter 5: Final Showdown, Sega is hosting this tourney for arguably the deepest series in the genre, with a $15,000 payout to the Top 8 finalists. Meanwhile, Skullgirls publisher Autumn Games is contributing $1,000 and customized arcade sticks to the side event for its acclaimed, hand-drawn fighter.

Evolution is streaming special presentations by game companies and community members. Sony, which is promoting its upcoming brawler PlayStation All-Stars Battle Royale, and Capcom are each hosting panels. Other guests include commentators James Chen and UltraDavid, Maximilian of the YouTube series Assist Me! and The Online Warrior, independent-game developers, and community documentary filmmakers.