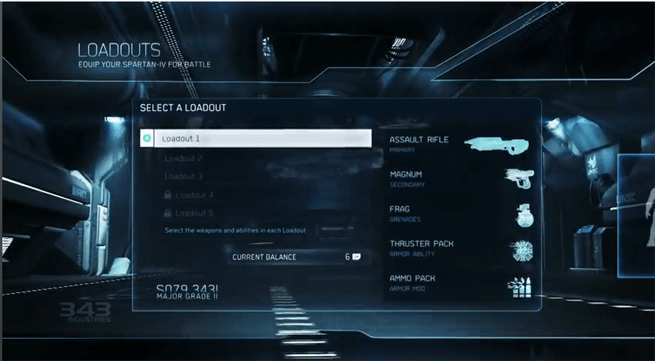 At the Rooster Teeth Expo (an event for fans of the comedy team behind Internet video series Red vs. Blue), Halo 4 developer 343 Industries fielded questions from fans regarding their concerns over the franchise’s evolving multiplayer. Recent hands-on reports with the game have left many with the impression that the Seattle-based 343 is trying to borrow from the Call of Duty series.

Before a match, players can select a primary weapon, a secondary weapon, a grenade, an armor ability, a tactical package, and/or a support upgrade. Many fans and detractors point to this design decision as something that is directly lifted from the Acitivision first-person shooter series.

According to Halo franchise development director Frank O’Connor, that isn’t how they view it. “When we were first starting to create the multiplayer, we thought that the loadout system looked more like Gradius than anything else,” O’Connor told fans during the Halo 4 RTX panel.

Gradius is a Konami-developed two-dimensional side-scrolling arcade shooter. Players could upgrade their weapons and speed as they unlocked more options for their ships.

We can see the similarity, but our cynical hearts are telling us that the Halo 4 system still looks more like what Infinity Ward designed for Call of Duty 4: Modern Warfare.

Certain Affinity, an Austin-based studio, announced during the panel that it is aiding 343 Industries in the development of Halo 4. That company’s president and founder, Max Hoberman, also responded to the claims that the multiplayer is similar to Call of Duty.

Hoberman explained that Certain Affinity worked on the Call of Duty series, and that Halo 4 is fundamentally different. “What we’ve done to Halo 4 multiplayer is incredibly true to the Halo series,” Hoberman told the crowd.

O’Connor also explained that the team didn’t want to do a public beta for Halo 4’s multiplayer. The team explained that the only feedback they would expect to get would be from super fans demanding that 343 undo all of its changes.