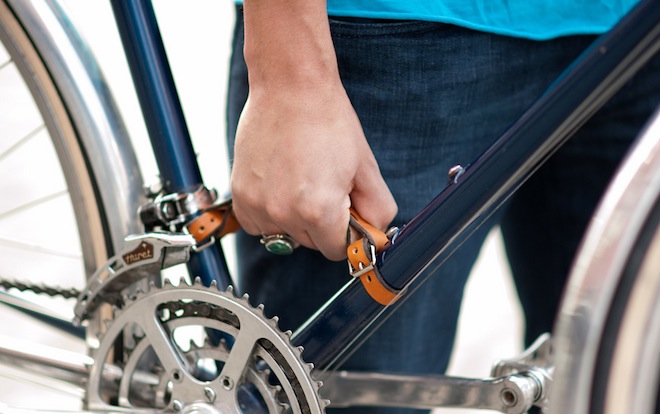 If you’ve ever felt that your bike lacked a convenient carrying handle, you’re in luck: A Portland-based boutique has just raised almost $20,000 on Kickstarter to make leather straps to ease your bike portages.

“We wanted to try out the business model of making one large wholesale purchase of materials and then making a large run of a product at one time,” Walnut Studiolo‘s Valerie Franklin told me today. Instead of paying retail for materials and then making products in small batches, as they usually do, the Walnut Studiolo team has  now raised enough money to purchase a lot of raw leather at wholesale prices, making their production more efficient.

The Frame Handle is a nifty/silly leather strap (available in honey brown or black) with two little buckles, one on each end, for installation in the bottom triangle of your bike frame, between the down tube and the seat post tube (see photo). This makes it easier to carry your bike under your arm, since you don’t have to tilt the frame forward in order to grab onto the down tube. And, the photos promise, this will make commuting chores like going up and down subway stairs much easier. Of course, acerbic blogger Bike Snob NYC couldn’t resist mocking the Handle.

Mock-worthy or not, Walnut Studiolo’s Bicycle Frame Handle project surpassed its goal yesterday, with 513 backers putting up a total of $19,584 in pledges. 282 of those people pledged $30 or more, qualifying them to get one of the first handles at “less than retail” price. 137 people promised $50 or more to get two handles.

Bike Snob NYC, as it happens, has mocked Walnut Studiolo’s products before, but his coverage — along with writeups in other blogs — actually helped launch the company.

“It always hits a little close to the bone,” Franklin said about Bike Snob’s coverage. “It’s like watching Portlandia that way. But ultimately, it’s attention, and that’s good.”

Good indeed: Even though his coverage was unflattering, several visitors from Bike Snob’s website wound up pledging money to the Kickstarter project. It just goes to show you that there’s no such thing as bad press.

The success of this project is an indication of the power of Kickstarter to bring attention (and funds) to product ideas that might not otherwise get funded. Thanks to Kickstarter’s wide reach (it’s enabled $215 million in pledges to successful projects so far), a small regional craft maker can attract worldwide attention for a project that some would consider quirky, weird, or downright impractical. It’s the long tail in action: Portland might have a few hundred (or a few thousand) hipsters, but post the project on Kickstarter, and you can reach millions of bicycle-loving beardos.

Build a better mousetrap, and the world will beat a path to your door. Make an awesome video game, and gamers will throw money at you. Build a handsome leather bicycle strap, and hipsters will drop their mustache wax and pledge the equivalent of a dozen hand-crafted organic pour-overs to support you. 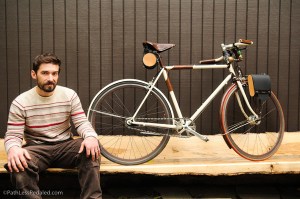 Walnut Studiolo is the creation of Geoffrey Franklin, an 8th-generation Oregonian (with the beard to prove it) who is also an architect. Together with his wife, Valerie, he has been making leather accessories for bicycles since 2009. Those accessories include such practical items as under-seat bags and leather beer can holders, as well as more whimsical items like a strap for belting a whole six-pack to the top tube of your bike, or a leather six-pack holder, because those cardboard or plastic holders are just so declassé that you’d be embarrassed to bring them to the outdoor movie screening in the park. The company does the bulk of its sales via its Etsy site, where it’s sold more than 3,000 items since 2009. Geoffrey has been working fulltime on the business since early 2011, and Valerie since late 2011.

It all started, Valerie said, because Geoffrey couldn’t find a U-lock holder to match his bike’s leather Brooks saddle, so he made one of his own. The two Franklins then created a small Etsy site, sold a few items, and added a few more products. But the business really took off when they went to a bicycle craft fair hosted by influential bicycling blog BikePortland.org, which wrote a blog post about their business.

“Our revenues have grown from a part-time hobby to supporting us full-time as a family,” Valerie told me. “It’s become a family and a lifestyle business. It was very exciting to be able have both of us working fulltime, from home, on stuff that we like.”

Despite the lifestyle business, the leather bike accessories, and her husband’s beard, Valerie said they are not hipsters.

“We’re not that fashionable,” she said.