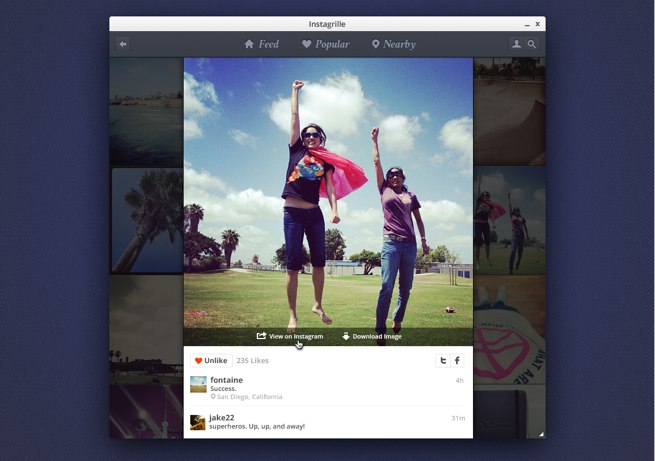 How sweet it is to be loved by Instagram users.

SweetLabs is the San Diego-based startup that runs the one-year-old Pokki application store and platform for Windows users. The four-year-old company has acquired Instagrille for an undisclosed sum and has today released version two of the app to bring a richer Instagram experience to the desktop.

“The thing just started taking off — it took on a life of its own,” SweetLabs co-founder Chester Ng told me during an interview at the company’s downtown San Diego headquarters. “It became one of the most popular Pokki apps.”

After Instagrille, which was immediately uplifted by the increasing popularity of the Instagram application, was downloaded millions of times, Ng and company reached out to Denysiuk, then a student with little free time to support the ongoing development of the application, to see if they could join forces and take the application to the next level, Ng said.

“We care about modernizing the PC. We care about bringing apps to the PC,” Ng told me in an attempt to explain the rationale behind the purchase (the deal closed in the first quarter of the year). “It should be our responsibility to the build the best Instagram experience on your computer.”

Of course, as Ng was quick to point out, the purchase also helps SweetLabs’ fledgling Pokki application store ride the tidal wave of current Instagram interest and reach more users.

“[Instagrille] is a killer app on Pokki,” he said. “What we’ve seen is that people who install Instagrille click on the Pokki store and they install all these other apps.”

With Facebook as Instagram’s parent company (though that deal is still pending), it’s now or never for SweetLabs, which needs to not only capitalize on Instagram interest while its still hot but also significantly beat Instagram at its own game — at least on the desktop.

And Ng thinks the new Instagrille application, released on the Pokki app store today for Windows users (coming soon for Mac users too), offers a compelling enough experience to draw in millions of Instagram users, especially while Instagram lags on creating a fully-functional web app and releasing a desktop app of its own.

Instagrille, rewritten from scratch with the help of Denysiuk, aims to make photos shine on a large screen. The app features photos in feed and popular streams, and in grid or list views. It also includes people and photo search (with saved searches), real-time notifications, the ability to follow or unfollow users, and resizable windows to maximize the photo-viewing experience on large monitors.

Instagrille application users can also download Instagram photos to their computer and view photos nearby, two things they can’t do in any of Instagram’s own applications.

The application is sexy enough to make even Mac-addicts drool. Thankfully, Ng promised a Mac release of Instagrille just as soon as Pokki pushes out a Mac version of its app store, which he said will happen “soon.”

SweetLabs has 71 employees. The startup, which has raised more than $21 million in funding, currently earns all of its revenue from its other product, OpenCandy, a software network that connects developers and advertisers.