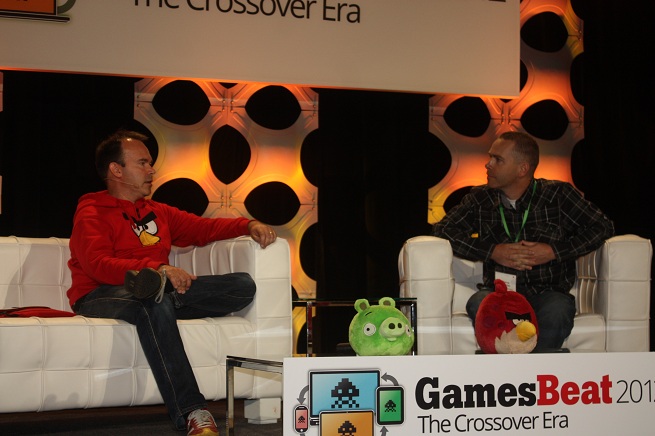 Angry Birds is apparently not enough for Rovio. The makers of the biggest game on mobile devices is ready to roll out a new game: Amazing Alex, which will be available Thursday for Android and iOS devices.

This is a big deal, since Angry Birds has garnered more than a billion downloads to date.

Peter Vesterbacka (pictured left), the chief marketing officer and Mighty Eagle at Helsinki, Finland-based Rovio, said in a fireside chat that Amazing Alex is a new intellectual property that the company acquired and has given the “Rovio treatment.” That means it has been refined, put through a quality ringer, and uses the same kind of physics-based puzzle gameplay that’s made Angry Birds such a hit.

“We are going to throw our marketing machine at it as well,” Vesterbacka said. That means the company will cross-promote the game using its Angry Birds distribution infrastructure.

“The main distribution is through our games,” he said. “We built the biggest distribution network in the universe, with 1 billion downloads” of Angry Birds. He added, “We want to get the game the audience it deserves.”

The new game originally launched as Casey’s Contraptions. Rovio bought the rights to it and is releasing it under a new title.

Amazing Alex is one of many new business efforts under way at Rovio. Vesterbacka said Rovio is launching a Saturday morning animated series in the fall. He also said the company is moving forward with books, merchandising (now 30 percent of Rovio’s business), and other efforts to keep growth coming.

Above all, he said Rovio remains focused on high-quality games and serving the company’s fans. He noted that Rovio worked on 51 games before it succeeded with Angry Birds.

See the trailer below: