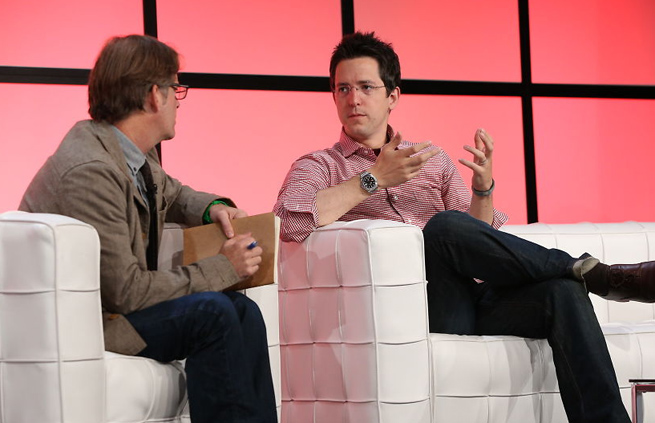 Dave Morin, the chief executive of the private mobile social network app Path, was onstage at MobileBeat 2012 this morning with Michael Copeland, the senior editor of Wired. And Morin, true to form, was full of great one-liners.

Morin zinger #1:
“The first version of Path was 70 percent a failure.”

Initially, the team built off their core strengths: web design. Path 1.0 had too much user interface for mobile, Morin said: tabs, an explore feature, a friends button, a separate profile screen, and more. Path 2.0 was simplified; the team spent 20 iterations or more on the home view, trying to figure out how to fit everything in without cluttering it.

Morin told the thousand or so attendees that the biggest lesson they learned over a year spent redeveloping Path from 1.0 to 2.0 was that people really only use one screen.

So Path looked at the quantitative data — features used, daily active users, monthly active users — and correlated it with extensive ethnographic observations of what people were actually doing. Then the company made Path essentially single-screen.

Morin zinger #3:
“The way you should think about mobile is that your first version’s probably going to fail,” Morin says.

With cofounder Dustin Mierau, Morin rebuilt Path from the ground up. Positive user feedback helped, since in the first iteration take-up was slow: only about 10,000 daily active users. Comments such as “I love this network. I’ve never felt so close to my family,” and “Never shut this app down” kept the team focused and motivated.

Morin zinger #4:
“Truly good design is design that is inevitable.”

Morin worked for Apple for two years, and he learned from Steve Jobs that you can’t put lipstick on a pig. Design is integral to everything. It’s not just the aesthetic, Morin said. It’s everything behind the user experience. “We spend an enormous amount of time on performance just to make sure it’s scrolling smoothly,” Morin said.

Another example: Instead of time-stamping every post, Path designers created a floating clock that “sort of floats down with the screen,” giving contextual data without intruding into the interface.

Morin zinger #5:
“If I learned one thing working at Facebook: If users are trying to use your app in a certain way, get out of their way and let them.”

The team fit all the key requirements into the new design, including something they noticed users doing frequently: uploading screenshots from apps. Users were uploading screenshots from the iPod app on their phones, from Nike+ and even game achievements. So Path made the process simpler, and let the screenshots guide them to deeper API-level integrations with other apps, which is also a key feature in the latest version of the app.

And the goal of that app?

Morin grew up in Montana, and his cofounder is from a small northern British Columbia town. In other words: They’re both from a village environment, where everyone knew everyone. Referencing that, Morin mentioned the famous William Gibson quote: “The future is already here — it’s just not very evenly distributed.”

Morin zinger #7:
“We wanted to bring that to the world.”