An iOS application called Sonarflow for Spotify, which hooks into the streaming service for access to 15 million tracks and counting, promises to point you to artists and songs that you’re sure to love.

Sonarflow for Spotify, a brand new application from three-year-old, Austria-based music discovery startup Spectralmind, is one of 15 mobile products competing today for best in class in the Innovation Competition at VentureBeat’s MobileBeat 2012 conference in San Francisco, Calif.

“Spotify has a lot of content … you can literally play any song you wish in an instant,” Spectralmind CEO Thomas Lidy told me in an interview. “But the problem there is you have to know the name of the artist or the title of the songs. If you don’t know them, it’s really hard to find music.” 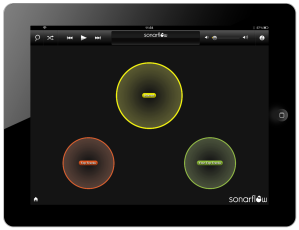 And that’s where Sonarflow for Spotify comes in. Sitting as a visual music discovery overlay on top of Spotify’s catalog, the application first presents the user with three different bubbles — starred, your top tracks, and top tracks — for touch-based music exploration. A person can then pinch to zoom into any of the circles, click on a artist for additional info, and double tap on tracks to listen to them.

“The visual aspect is really our strongest aspect here,” Lidy said. “We put a layer on top of Spotify where you can see what’s there … what you can find, and what you can discover.”

Sure, that sounds like a rudimentary, hierarchal approach to music discovery, and maybe it is. But where the application shines is in its ability to recommend new artists and send a Spotify listener down an unlimited number of musical paths. A click of the search button in the upper right-hand corner will display five new artists, denoted by white bubbles, around an artist the user already knows, and a tap on an artist will pull up all available tracks for playing. You can also star the new songs you discover in the app, which in turn saves them to your Spotify starred tracks collection. 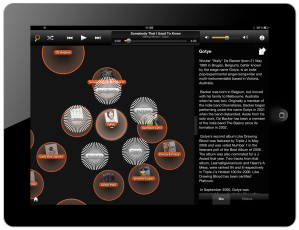 In playing with Sonarflow for Spotify, I found the application to be a fantastic vehicle for musical enlightenment. Just a few clicks in and I was listening to pleasing tracks that I had forgotten, simply because I couldn’t remember the song title or artist name, and also unearthing several new favorite artists.

The application, however, isn’t yet ideal for a lean-back, automated listening experience, as Spotify’s own new radio feature proffers, unless you’re content playing straight through the tracks of one of the artists you discover.

That’s going to change in future releases, Lidy promised me. Two pending features, for instance, include an auto-playlist option and a way to create playlists by drawing a path on the screen, he said.

Still, we’re only seeing pieces of Spectralmind’s intelligence in this release, Lidy insisted. The company behind the application has been working on audio recognition technology since its earliest days and is capable of capturing the sound of music to make recommendations based on rhythm, melody, or voice matches. This proprietary software technology, which has yet to be baked into Sonarflow for Spotify, will make potentially infinitely more interesting recommendations in the way of fresh, obscure, and indie artists.

“Right now, very popular artists are popping up, but some people prefer to find music that nobody else is aware of,” Lidy said. “It’s not possible with typical music recommenders, because [they] work only if the music has been listened to by many, many people before. With audio-based recommendation technology, we can bring in any song from the 16 million songs on Spotify just by matching a user’s taste in terms of rhythm and melody.”

Vienna-based Spectralmind has 12 employees and has raised $1.175 million in seed and grant funding. The company, which started its life building products for media professionals, previously released a Sonarflow application for iPhone and iPad with similar functionality pivoting around a person’s individual music collection.