In what is perhaps the most symbolic of all its mobile releases, Twitter has pushed out new versions of its applications for iPhone and Android that finally deliver the “consistent Twitter experience” the company promised weeks ago.

Released Tuesday, Twitter for iPhone and Android now feature the same expanded tweets functionality users experience on the web, the same search autocomplete improvements introduced on the web last week, and the ability to enable push notifications for tweets from people you follow.

Of course, we all knew these updates were coming, as a little birdie did more than hint that these enhancements were on their way. 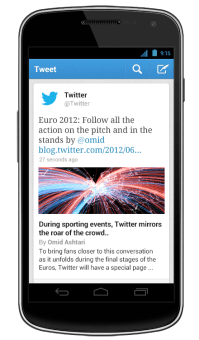 Most of today’s app updates, but especially the expanded tweets feature, relate back to Twitter’s mission to become the “common dude’s RSS reader,” as my astute colleague Jolie O’Dell noted last week. With the expanded tweets, or enhanced Twitter Cards as they’re also called, Twitter users can discern the context, by way of embedded photos, playable videos, and article snippets from media partners, around the 140-character bits of information that are flying by.

The mobile refresh, more importantly, brings parity between the company’s web and mobile experiences. And this whole consistency thing is becoming quite the big deal in case you haven’t noticed.

In an effort to keep the Twitter experience the same across all applications, including those developed by third-party developers, the information network put its foot down with a nicely worded but not-so-subtle warning to developers to follow the rules of the road, or else.

Some of the implications of the letter, like today’s mobile updates, are rather positive in nature. As Twitter’s director of consumer products Michael Sippey said, “We’re building tools for publishers and investing more and more in our own apps to ensure that you have a great experience everywhere you experience Twitter, no matter what device you’re using. You need to be able to see expanded Tweets and other features that make Twitter more engaging and easier to use. These are the features that bring people closer to the things they care about. These are the features that make Twitter Twitter.”

But the message also carried with it a death-sentence for any application that dares to mimic or reproduce the core Twitter experience. LinkedIn, for instance, which apparently now falls into that “or else” category, can no longer display tweets pulled in from Twitter because it was mimicking the “mainstream Twitter consumer client experience.” And that’s a big no-no.

Today’s releases for Android and iPhone signal that Twitter is intent on keeping its word on the consistency front — for better or for worse.