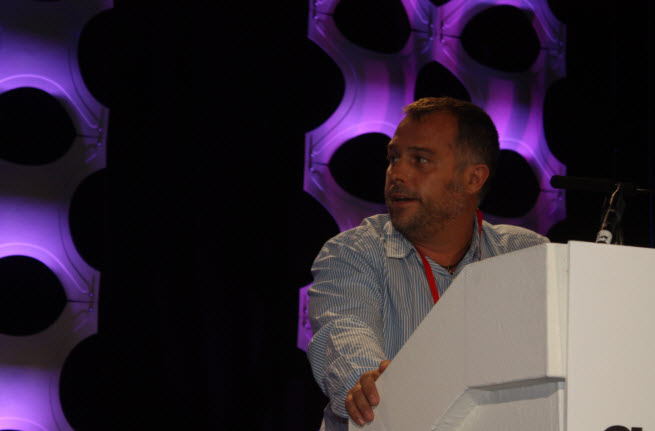 Its secret? Akamon adapts games with rules that are 80 percent similar between regions. Thus far, it has 38 games, which are accessible from a variety of portals, including “white label” rebranding sites, social networks, and mobile platforms.

“We believe in a type of game and regions that are being underserved,” said Akamon CEO Vicenc Marti (pictured above), “and that is the social and mobile games for Southern Europe and Latin America.”

He joked that his native Spain happened to receive a bailout on the day he was presenting.

The finalists included Loki Studios and its mobile title GeoMon, which impressed with its use of location data to determine which monsters appear in the game. Playmous provided an intriguing glimpse into a service offering behavioral metric data and anti-cheating software. A complete listing of the finalists can be found here.

“Akamon identified an untapped market opportunity spanning two geographies, and then applied a rare combination of distribution innovation, discipline in attacking the opportunity, and execution,” said Goldberg, one of the judges. “The initial commercial results suggest that the company can become a big fish in a pond with defensible barriers to entry — provided, of course, the company retains the extraordinary focus that makes Akamon our 2012 GamesBeat champion.”

Burkett said, “Akamon was given the nudge in a strong GamesBeat finalist field due to it’s focus on a strong low cost business model and excellent presentation. It was a pleasure to see them and the other talented teams strutting some great ideas.”

The fourth annual “Who’s Got Game” contest highlights the best startups, with representatives from six of the most intriguing presenting onstage in front of a large crowd.