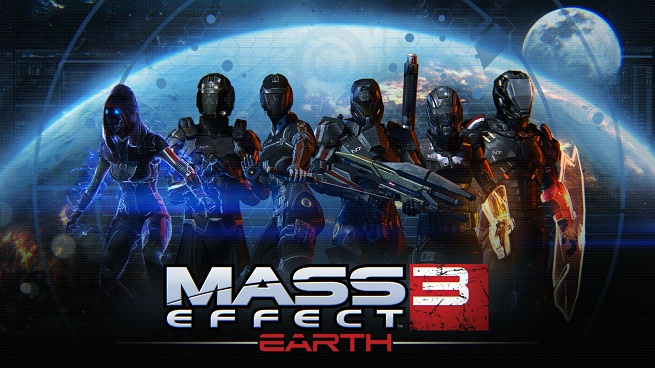 Touting the low, low cost of absolutely nothing, Earth’s contents furnish the science-fiction role-playing epic’s cooperative multiplayer with a slew of fresh unlockables won by racking up points through completing objectives while fending off increasingly tough waves of Cerberus, Reaper, or Geth forces.

As humanity’s home stands as the climactic centerpoint of ME3’s colossal conflict, three new maps reflect the last-stand nature of the war and take place in the ruined cities of Rio De Janeiro, London, and Vancouver.

You’ll need the added firepower. Earth adds a new difficulty tier on top of the already near-impossible Gold: the shinier Platinum. We’re already assuming the standard “cower in a corner” tactic works well against superbeefy foes, but if you manage a smidgen of bravery (perhaps while humming an orchestral fanfare as you charge), Earth’s 12 new weapon modifications and 11 additional gear upgrades adds an extra edge.

Lastly, operatives have a new objective while in the field: VIP escort. Occurring randomly between waves, the escort mission requires players to walk a target to an extraction point while soaking incoming fire. Combined with Platinum difficulty, it’s easy to envision a few broken controllers and fragmented keyboards in the near future.