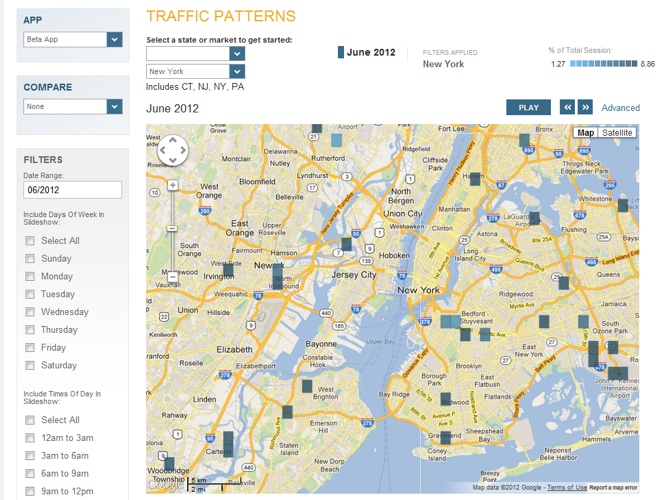 You probably know how long consumers are using your mobile app, and what they’re doing within them — but where are they actually located? That’s the question that location analytics company Placed hopes to answer with its product, Placed for Developers.

Previously only available for Android apps, Placed announced today that its product is now available for iOS apps as well. It made the announcement at the MobileBeat 2012 conference, where it’s competing against other mobile services in our Innovation Competition. (Update: Placed won the competition.)

Placed believes there’s plenty of value in knowing exactly where consumers are using your apps, as well as tracking their paths through the world. For example, you could tell if consumers often used your app next to restaurants, which could allow you to charge for higher ad rates to large restaurants. The company stresses privacy by saying it will always ask permission for using location data, never use the data for ads, and anonymize users.

“Our aim is to make Placed Analytics a standard tool for any mobile app that uses location,” wrote Placed founder and CEO David Shim in an e-mail conversation with VentureBeat. “Location is what makes mobile unique, and Placed Analytics is the way to quantify it.”

When it comes to design, Placed says it had a unique challenge in presenting location data to its customers. There’s a lot of noise once you start collecting massive amounts of location data, and the company has developed ways to turn most of that noise into useful information. It focused heavily on the design of its reports, which aim to be simple and intuitive, offer new insights for users, and give power users the ability to easily dig deeper.

Placed is based in Seattle, Washington and has raised $3.4 million so far from Madrona Venture Group and others.