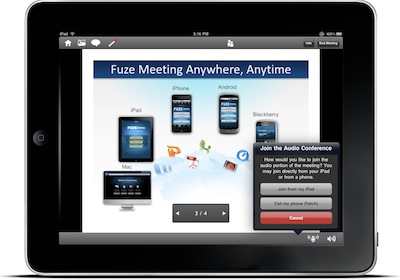 FuzeBox, a pioneer in real-time visual collaboration, raised a significant $21 million in its first round of institutional financing today.

The FuzeBox application allows people on any device, on any operating system, from anywhere in the world to conduct live video meetings. All the screens are synced so participants see the exact same thing. Furthermore, users have a host of tools at their fingertips, like zoom and a laser-pointer, as well as the ability to upload and access documents, graphics, videos, presentations, and audio files.

“We are creating a whole new category,” said CEO Jeff Cavins. “Our goal was to revolutionize the way the world does business. You can conduct online meetings without sacrificing the quality of human collaboration and interaction. The three most important components in business are the telephone, email, and the airplane. We think we are the fourth.”

FuzeBox strives to recreate real life interaction virtually, thereby making business trips obsolete. Why fly to Buenos Aires when you can conduct a meeting with 10 attendees in a secure, high-resolution environment online? However, the app is also useful for those who don’t lead the jet-set lifestyle. Creating an easy user experience was as important during the design process as incorporating tools for professionals.

Cavins mentioned three customers the company kept in mind during the design process: the 91-year-old CEO of a multibillion-dollar corporation, a 10-year-old girl with a lemonade business, and the female executive who takes care of the home but still has to attend meetings. Each of these customers can conduct business from their iPad.

The opportunities to use this technology are endless, as evidenced by the impressive and diverse roster of clients FuzeBox has under its belt. Apple has had major involvement and even featured the app in recent commercials. Other customers include eBay, Disney, NASA, Spotify, CBS Interactive, multiple universities and health organizations, large non-profits, and even the Department of Veterans Affairs.

FuzeBox was able to build up this kind of clientele by providing features other web conferencing apps lack. Its servers are built with advanced technology that can support massive entities like government agencies or large corporations.

“If you are going to win NASA or Reuters or Apple, you better have the security stuff nailed tight,” Cavins said. “We have high encryption standards. We also own our own phone company, and our platform is built to withstand the most difficult pounding. All this is extremely expensive and not something a little startup can do.”

And FuzeBox is certainly not a scrappy startup. It arose out of company called Callwave that went public in 2004. At the end of 2007, Jeff Hinley, the chairman of the board at Oracle, recruited Cavins to invigorate the ailing company. In 2009, Cavins and three other partners retired the shares, took the company private, and spent $40 million to build FuzeBox.

Up until this point, the company did not need to raise additional funding. This round which was led by Index Ventures, with participation from Khosla Ventures and Insight Ventures and will be put towards scaling the products and taking marketing efforts worldwide. Cavins says this is just the beginning of where the company can go.

“If this is a 9-inning baseball game, we are coming out of batting practice,” he said. “I think this could be a $6 billion company, it just has to grow into that valuation.”

While countless other online meeting applications exist, like WebEx, Live Meeting, Go to Meeting, and Join.me, no other app functions on this level. Fuzebox already powers over 78,000 online meetings a day in 122 countries and is translated into 10 different languages. Over half the customers are outside of the US. FuzeBox currently has 56 employees in the US and about the same number in Europe. It is based in San Francisco.