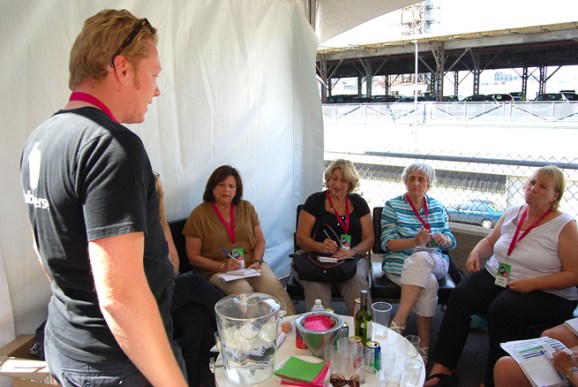 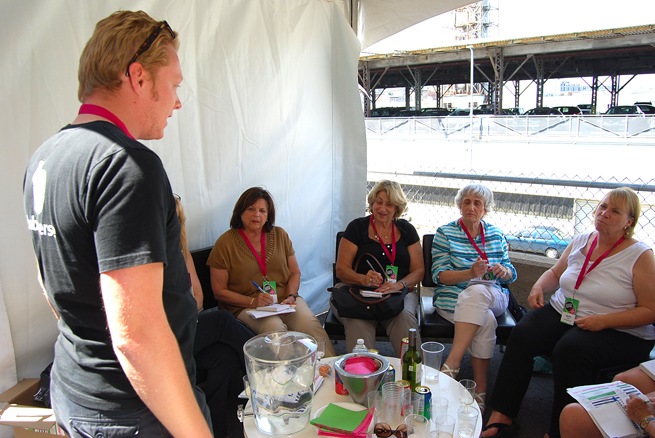 If you ever thought pitching a VC was hard, maybe you should try giving your talk to a pack of grandmothers who aren’t afraid to ask tough questions.

Among the most popular events happening today at Montreal’s International Startup Festival is the “Grandmothers” pitch tent, where seven grandmas quiz startup founders on their businesses. Whether they asked “Are you actually making money?” or “What is cloud computing?”, watching the grandmas in action proved a fun exercise to see if founders could talk to folks without any tech expertise.

This is the second year Grandmas have put startups in the hot seat at ISF. Last year, mobile data compression startup Onavo took first place in the Grandma competition. That shows the grandmas have a sharp eye for talent because that same company won VB’s MobileBeat competition in 2011.

I watched a co-founder of translation startup Babelverse, one of the six finalists at TechCrunch Disrupt NY 2012, give his full pitch to the grandmas to see them in action.

Babelverse’s Josef Dunne gave a clear pitch about his company with as little jargon as possible, explaining that the company makes it easy to get a translator for various things. The company has more than 3,000 translators and it takes a 30 percent cut while the translator gets 70 percent. He explained that Babelverse is even helping bring translation service to the International Startup Festival with English-to-Québécois-French translations for the presentations.

The grandmas asked whether the company had a monthly fee, what cost per minute the service charged, if the company was profitable, and how long the company had been running. Dunne said he was impressed with their questions.

“They were savvy grandmas, but they were also very sweet and smiley,” Dunne told me. “It helps that we always try to remove the jargon from pitches, but this time it was especially important.”

Julia Egener, one of the grandma judges, told me she enjoyed the opportunity. Egener said that the skill level of the people giving pitches varied greatly, with some who have just created a company a week ago and others who have been honing their pitch for years.

“This gives me an appreciation for all the research that has to go into chasing your dream,” Egener said. “It’s hard — really hard. We’re the consumers. If you can’t sell it to us, then what hope do you have?”

We will add the winner of the “Grandma’s prize” to this post after the winner is announced Friday.