While community news sharing site Digg may have sold for the low price of $500,000, its other assets may have fetched a bit more.

Professional social network Linkedin is said to have purchased some key patents from Digg just prior to its sale, according to a TechCrunch report that cites an unnamed source familiar with the matter. VentureBeat is currently reaching out to LinkedIn and others for confirmation on this information, and will update our post if we learn anything new. (See update below for Kevin Rose comment.)

As for the patents, TechCrunch’s report indicates that LinkedIn purchased 15 patents from the social news site for roughly $4 million. One of the more valuable patents is said to involve the “click a button to vote up a story” functionality, which would certainly be useful for any social media property — both for integration into its own services and through licensing deals. Those patents will be licensed out to Betaworks for use in the new cloud-based Digg and News.me properties.

The patent sale supposedly took place around the time Digg forged a deal to bring its 15-employee engineering staffers over to the Washington Post Company back in May. The WaPo deal, according to TechCrunch’s source, was worth $12 million, so when you combine all the assets Digg sold, it amounts to about $16 million.

While we don’t have confirmation on any of the asset sale numbers, it’s safe to say that Digg waited way too long to maximize the payout.

Update 7/13/2012 – (10:16 a.m. PT): Kevin Rose just posted a statement about Digg’s sale to Betaworks on his Google+ account, with no mention of the pricing involved in the sale. However, when scrolling through the comments, Rose did respond to someone about the $500,000 price being very low, especially since Digg had previously raised $45 million in funding.

Rose writes: “Check TechCrunch, was a complicated sale.” While that isn’t a confirmation on the amount, it does indicate that multiple buyers were likely involved. (Screenshot below) 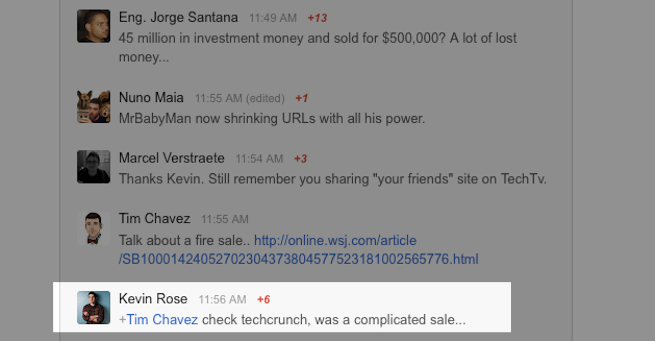 Update#2 (1:20 p.m. PT): VentureBeat has learned that LinkedIn did indeed purchase some of Digg’s assets, but some of the earlier details were slightly off, according to a person with knowledge of the matter.

Apparently, LinkedIn only purchased one significant patent as well as a handful of patent applications at a cost of $3 million to $3.5 million. Discussions between the companies began earlier this year, and its unclear who approached who first. I’m guessing that it was Digg who approach LinkedIn after it became apparent that it wasn’t able to sell the entire company to one person.