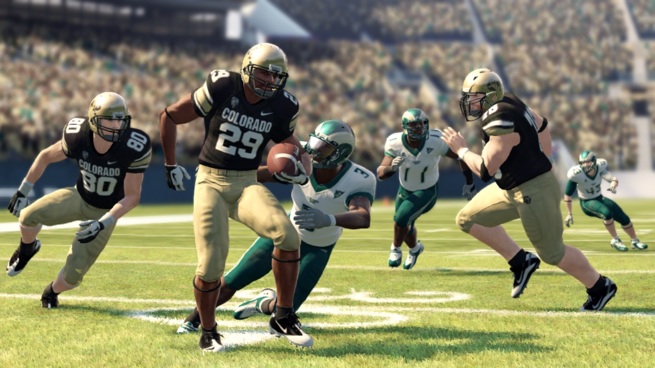 For years, NCAA Football has played the role of spunky, mid-major-conference underdog to Madden NFL’s Bowl Championship Series powerhouse. With this year’s release of NCAA Football 13, developer EA Tiburon is throwing deep by adding new modes and features, including a revamped passing system. But the game is like a three-star recruit, fundamentally sound yet unremarkable.

NCAA 13 has more stuff crammed into it than a panicky freshman’s brain before mid-term exams. The new content bombarded me right off the bat. Every item on the main menu seemed like it carried a glossy “new” emblem, and I actually had trouble sifting through the chaotic, ESPN-inspired interface.

The typical modes are all here — Dynasty, exhibition, the career-style Road to Glory, and others — along with some retooled gameplay mechanics. But this year’s noteworthy addition is the Heisman Challenge, where you can choose to rewrite history as a winner of college football’s greatest individual award.

More modes mean more ways to play
Whether you want to run through a quick edition of the Rocky Mountain Showdown or start a career as a blue-chip high school recruit, NCAA 13 has a mode to meet your mood. Road to Glory and Heisman Challenge give you plenty to sink your cleats into. Mascot Mash Up and One-Button games provide lighter and less-time-consuming distractions.

Don’t feel like controlling the action on the field? Grab a virtual clipboard and coach your team to victory. You can even take your play online with connected features like Online Dynasty or the Team Builder, where you can meticulously re-create your high school or Division III squad for head-to-head battles.

Hail Mary with increased precision
Many of the countless changes and additions made to this year’s NCAA Football deal with the passing game. Now you can lead receivers by nudging the left analog stick in your preferred direction before completing a pass. Quarterbacks have new drop-back animations. And convenient indicators let you know when receivers are actively looking for the ball. 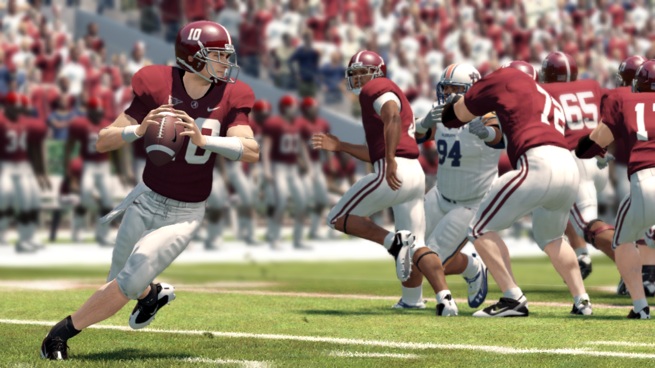 Road to Glory is better than ever
NCAA’s signature career mode is back, and just like in previous games, you start your journey in high school, doing your best against crosstown competition to earn a scholarship and achieve greatness with a big-time program.

This year, the experience features some minor but welcome improvements that add more depth and challenge, such as new difficulty settings, improved play-calling A.I., and the shooter-inspired, slow-everything-down Reaction Time mechanic.

Road to Glory continues to be equal parts tedious and addictive. More important, it’s still one of the most enjoyable portions of the whole NCAA Football package.

The Heisman Challenge is a little weird…and blasphemous
So when I first entered the Heisman Challenge, I had to pick an illustrious winner of the mode’s namesake trophy (from a limited selection), add him to a random team, then start a new career, hoping to surpass the chosen player’s original stats.

Since 1994’s Heisman winner, Rashaan Salaam of the Colorado Buffaloes, was not on the list, I chose Oklahoma State’s Barry Sanders. After all, my Buffs were on the upswing in 1988 when Sanders won the Heisman, one year away from earning the first of back-to-back-to-back Big Eight titles and two years from winning the National Championship. If Sanders knew what he was doing, he would have stormed out of the tunnel with Colorado mascot Ralphie instead of chumming it up with the Cowboys’ Pistol Pete. Or at least that’s what I told myself to justify my cringe-inducing choice. 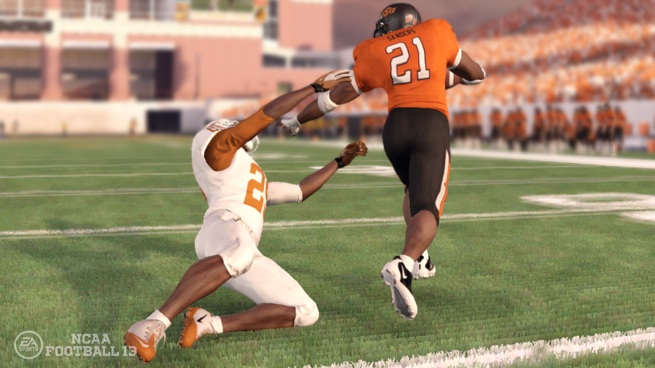 After playing a couple of games and torching the opposition with my alternate-history Colorado Barry, I had to stop. I just didn’t feel right. College football is a sport of passion and rivalry. In this case, being able to play gridiron god was disturbing. Sanders was never meant to don the black, silver, and gold, and neither were Georgia’s Herschel Walker or Boston College’s Doug Flutie.

I can only imagine a Notre Dame fan placing Michigan’s Desmond Howard on his team. You’d have to wonder, “What would Touchdown Jesus do?” He would let you relive the glorious moments in Heisman history instead of giving you a reskinned Road to Glory where you add a nearly unstoppable legend to a random roster.

So does NCAA get the same treatment? Nope.

This has always been the case with the two franchises. Madden has consistently received new advancements before its overlooked sibling. So, college football fans are stuck playing a 13-named title with 12-based technology.

SportsCenter is next — well, not really
NCAA 13 features the full ESPN license, which means total access to America’s preeminent television sports network. Yet this mostly equates to dolled-up menus, website mockups, scoreboards, and the Bottom Line results ticker. That means no College GameDay crew — and no Lee Corso wearing a random, silly mascot head. While polygonal fans hold “SportsCenter is next” signs in the crowd, we get nothing of the sort.

What we do get are a few studio-update segments with host Rece Davis. Where’s a mumbling Lou Holtz when you need him?

Commentary is pretty humdrum, with multiple recycled lines dating back multiple years. Play-by-play and color commentary guys Brad Nessler and Kirk Herbstreit do the job and just that. Also, unlike Madden, we never actually see any of the announcers. A quick booth or studio shot would add wonders to the fake-TV backdrop. 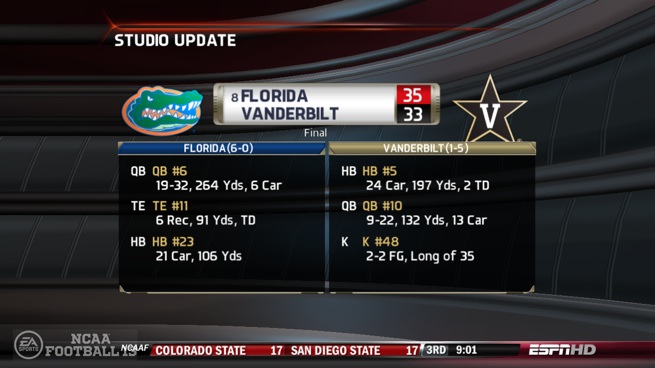 EA Tiburon has a great opportunity here, and the studio clearly cares about presentation. Last year, it focused on iconic school traditions and rituals, bringing many of those into its game. And it added some nice crowd-audio nuances this year as well. The devs should put the same amount of dedication into a more-complete ESPN experience.

NCAA Football has always struggled to find its own place on the pigskin pecking order. While EA Sports has continued its quantity-over-quality approach with this latest entry, the title still provides a solid college football experience. If you’ve played previous games in the franchise, you’ll know what to expect — breakdancing mascots, deafening snare drums, and the pageantry only found on a sun-kissed Saturday afternoon.

NCAA Football 13 was released on July 10, 2012, for the Xbox 360 and PlayStation 3. The publisher provided GamesBeat with an Xbox 360 copy of the game for the purpose of this review.