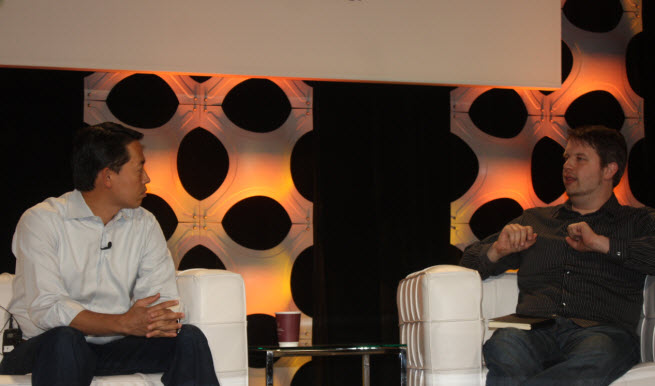 Mark Pincus wants Zynga to reach a billion players. Facebook has been good to Zynga over the past five years, but the social network is not going to give it that many users. To get there, he’s counting on David Ko, the social gaming company’s chief mobile officer.

Zynga has been steadily expanding, buying mobile game companies such as OMGPOP, the maker of onetime mobile sensation Draw Something. Zynga has also opened up a new mobile publishing division so it can publish mobile games made by third-party developers. That way, Zynga can cash in even if its own game designers aren’t the ones to come up with the next Draw Something or Words With Friends.

But ultimately, Ko believes that Zynga will hit its goals if it can establish brands with its mobile games that everyone knows and wants to play. Ko discussed this with Wired Game|Life editor Chris Kohler (pictured right) at our recent GamesBeat 2012 conference, where the theme was the Crossover Era: moving from one segment of the game market into another as a result of marketplace disruption. Here’s an edited transcript of the interview. 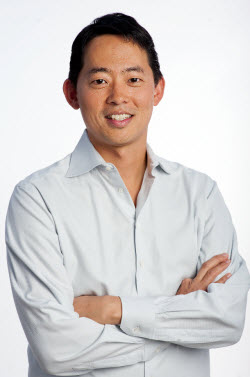 Chris Kohler:
There once was a company called Zynga.
Who did a quite interesting thing-a. Words With Friends popularity,
Caused Alec Baldwin hilarity.
If only he played Draw Something-a.

Kohler: Fair or not, GamesBeat has only just begun. And yet I’m already getting a sense from a lot of the presentations here that there are a lot of challenges affecting mobile developers. You hear sentences like, “Of course it’s very difficult to get an app discovered…unless you’re Zynga.” “Of course it’s very difficult to decide what platform to put something on…unless you’re Zynga.” True? Untrue?

Ko: Well, I think it’s a mixture. We announced a new program around publishing to address that. We have been, for I would say the past year, getting lots of inquiries and focus from third-party developers saying, “There’s this real oxymoron in app development today. Through tools that are out there, and through third parties, it’s easier than ever to create apps in the marketplace. And there’s varying degrees of that. But it’s harder than ever to get discovered and to find the right audiences. Are there ways that companies like Zynga and others can help us do that?”

I do think you see a number of companies trying to address this. But I think it’s challenging; as the marketplace and the ecosystem has gotten more competitive, there’s tens of thousands of apps today that are getting submitted. There’s billions of apps now that are getting downloaded each month across multiple platforms. So I do think there’s a challenge there for smaller, independent developers to get their apps noticed. Unless you have a larger network, a larger player base to cross-promote from, it’s very challenging.

Kohler: So what is it that you propose? Because Zynga is essentially moving into this idea of third-party publishing for mobile apps: not simply promoting Zynga stuff, but taking other apps that are out there and leveraging what it is that you have to help them out. What is it you propose doing differently that’s not what Apple is doing with the App Store already?

Ko: For us, it really started with the network. We started publishing on the web in about March earlier this year. If you look at the combined network of mobile and web today on the Zynga Network, there’s about 300 million monthly users. There’s about 65 million daily active users, who we call DAUs. We’ve announced previously that there’s about 21 million on mobile, daily active users, on the average for the quarter. We like to see that as an average. 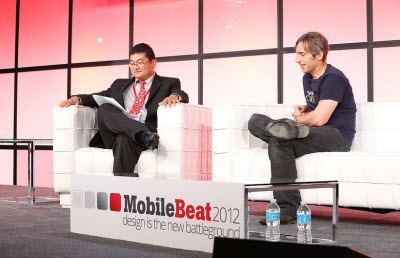 And then when we think about social interactions, on our network alone there’s over 450 million social interactions per day. So for a while, we were very focused on our own first-party games across mobile and web. Then we saw this opportunity to increase the overall ecosystem for games. Eighteen months ago, we were not that large in mobile. Many of you attended Mark Pincus’s earlier conversation. He talked about us being early [on Apple’s iOS].

That was really 18 months ago, when we first started getting into the mobile gaming space. Today, I think our metrics speak for themselves. We focused on first-party gaming. We view ourselves as one of the largest mobile/social gaming companies that’s out there today. And then what we’ve said is, when we open it up to third-party developers, how do we grow that ecosystem together? We have a network today that’s highly focused on mobile games, and what we want to see is how we take that to the next level. Not really just taking the 21 million that we have today, but how do we grow that pot together?

Kohler: What do you see about five years in the future? As far as mobile goes, how important is it to Zynga? What part of the business is it, and what do you envision as the ideal future for you in the mobile space?

Ko: I think the vision Mark has been very clear on is that our vision is to connect the world through games. We have a mantra that we want to get to a billion players. The reality is that we’ve seen a shift. We’ve seen more of our players come and say, “We want to be able to play your games anytime and anywhere.” Internally, we’ve spoken about how we ultimately, as a company, need to work with the best content creators that are out there, regardless of platform. And so what we’ve done is focus on asking, “How do we focus on getting our content out there across multiple platforms?” And then we really give you experiences tailored to those platforms.

What I do see out there in the future is a shift. I only have to look at my personal habits today. I don’t know if this holds for the majority of you, but I use my personal laptop, if it’s not for work, a lot less. I barely use it during the week. I moved to more of a tablet-centric usage for my own purposes, whether it’s in front of the TV or whether it’s just day-to-day. And I’ve used my phone for almost everything. There will always be that PC experience, but there is the tablet experience that is growing really fast. And then, obviously, there’s the sheer number of mobile phones that are in the marketplace today.

Kohler: During the keynote earlier this morning, Mark mentioned the initial FarmVille move into mobile and how users were ultimately kind of disappointed with that experience. He’d imagined that they simply wanted to play the same game they were playing, just on their mobile device. And he found out, learned the lesson, that in that case that wasn’t in fact what they were looking for. What were the lessons of that process?

Ko: I’ve seen some people say that Mark said we were early to mobile about two years ago. That’s not the case. I’ll just clarify that. The fact that Mark was talking about was that two years ago, we took on an ambitious project with one of our largest franchises to create, I would say, the same type of game experience across mobile and web. Everything is part of a learning experience. What we tried to find was, on the web, with FarmVille, they had an update cadence of updating things multiple times per day.

The way we had architected some of our apps two years ago was that we had made them in a way that, with the updates and the approval processes that are out there today, things would break and lag in the in-between period. Players weren’t getting the best experiences. We’ve learned a lot since then. We’ve learned in terms of how we think server-side versus client-side and how to utilize new technologies like HTML 5. We’ve tailored new experiences for players today and their playing habits. So I’m glad that we made those investments and learned two years ago, because I think it’s made our experiences today that much better for players. You see it across things like Words With Friends, for example, Draw Something, and all the new games that we’ve come up with. 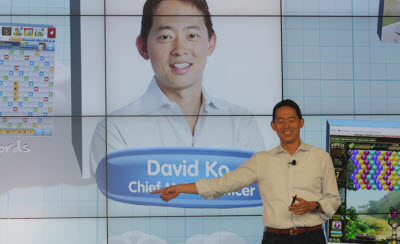 Kohler: Take, for example, Draw Something. What are the ongoing lessons from Draw Something? Where is that product now, and what are you planning on doing to push it in the future?

Ko: I think Draw Something, for us, has been similar to Words With Friends. I would say it’s a cultural phenomenon. It was one of those apps where it took the world by storm. We’re right now very close to our 10 billionth drawing on the network, which is just incredible. And in just this short amount of time. What we found was this game went viral; it went all over the world. And it grew, not only basically across iOS and Android and other platforms, it grew because of social. It was easy to play. You could share it and connect, and it was a game that required very little localization. People played it all over the world. Since that time,  we’ve tried to make the game a lot better.

What we’ve found is that we really want to create brands in mobile. We want to take this and extend it; we think it can become a brand that has an evergreen character to it. We’re really thinking about our portfolio in that manner. Earlier in the day, Mark talked about when we launch games. For Zynga, it’s really just the beginning. We don’t look at launching games, and then we put them to the side and say, hey, we’re done. When we launch games, this is really just the beginning of an arc, hopefully this long arc that we want to take with the game. Because you want to be social. Inherently, that is the foundation of all games that we build today. We’ve found that focusing on social can move scores like active social network (ASN) that Mark talked about and deliver games that are much longer in arc than, I would say, single-player games.